Home » The aftermath
Previous Next

Dermot and I drove home and rang our families. For me, it was a very surreal experience when I spoke to my parents in Scotland. It felt like I was talking to relatives about a patient, and not about me. They were shocked (to say the least), especially when I said that I would have chemotherapy first, which is always a scary word.

I then rang my brother in the States, who came out of a meeting so I could make his day as well. Dermot rang his daughter and the rest of his family whilst I was speaking to mine. It was very, very strange. We were both matter-of-fact on the phone, but everyone we were speaking to was very upset, and some were crying.

Another very odd evening, without much sleep. I was struggling to come to terms with the fact that the large visible lump in my breast is a cancer, and I would have to live / see / touch / feel it for the next 5 months, as would my husband. I had already dissociated myself from my breast when looking in the mirror, but it’s still there, and still a part of me. Intimacy was going to be strange until we both worked out how to deal with it. Do you touch it? Do you ignore it? Who knew what the right thing was?

Going public
The next day, we were sat having tea in bed, and I decided that I wanted to go public on Twitter. I didn’t think it would be possible not to tweet about my illness, as twitter is now a massive part of my life, and I’ve had so much support from twitter in the past year. (Partly from having an amazing bunch of triathlete / cycling friends, most of whom I’ve never met, who keep me going when training is tough. Partly for the support I had when I was off work for 5 months with depression). Also, if my cancer was common knowledge, then my husband would be able to get the support he needed at work. Because I was being treated in the same hospital where he works, it would be incredibly difficult to keep things secret. I was asked by my breast care nurse whether I wanted to be treated under a different name, to keep things private. I briefly thought about the pseudonym I’d worked out years ago when I was going to make my millions writing Mills and Boon Books (Louise Love), or my porn star name (Max Love), but decided to just be me.

I wrote the tweet, and Dermot pressed send. And we sat back and waited. The support and love and friendship that came following that tweet has amazed and inspired me. Complete strangers were offering their help. Cyclists and triathletes were giving advice on how to stay fit during chemo. The fabulous Kate Granger gave me tips on how to survive chemotherapy. Oncologists who I tweet with about advances in breast cancer were giving me advice on what treatment I should be having. All from a single tweet. I said at the beginning that I wasn’t going public to be a role model, or to be ‘brave / strong etc’, but just to be able to share my experiences and maybe help a few people along the way.

The rest of the day was spent phoning up everyone who came to our wedding and making them cry, and Dermot’s parents popped in for a cup of tea and a biscuit. Again, it all felt very surreal – I was explaining things like a doctor explaining things to a patient. It still wasn’t really happening, and I still didn’t really have cancer.

Questions, Questions…
There were some awful questions still running through my head, which could make a massive difference to my prognosis and survival. I still didn’t know what the ER and HER2 receptors were. I didn’t know whether the MRI would show the cancer was larger than the ultrasound, or whether it was in the other breast, and I didn’t know whether it had spread on the CT scan. I had to keep all this inside my head as I didn’t want to worry people without reason.

Cycling 100 miles
On Sunday, the alarm went off at 5am. Why, you ask? Well, I had signed Dermot and I up to do the West Suffolk Wheeler’s Dawn Raid – a 100 mile ride from Bury St Edmunds to Thorpeness for breakfast and back. It was the best thing I could have done. We both proudly wore our Stelvio kit (after doing the Gran Fondo Stelvio in June). We stayed together as a large peloton on the way there, and I was finally riding in a pack and enjoying the free speed. There were a couple of girls there, too. I told couple of people I knew during the ride, who were all lovely about it. It felt a little bit more real when I told them. It was a great route on quiet country roads, and the breakfast was really tasty. We ate at The Kitchen, and I had the world’s largest bacon sandwich on thick doorstep white bread. Coming back wasn’t so much fun. We were meant to split into 2 groups – fast and not-so-fast, but the not-so-fast men decided that they needed their own group, which meant Dermot and I cycled with a lovely couple, and 1 other Wheeler. It really felt like the club regulars couldn’t bear the thought of being in the slow group. If it hadn’t of been for Dermot staying with me, it could have been me and the couple plodding along on our own. Anyway, the 5 of us set off, and is started to rain. And it didn’t stop. I was really worried – I didn’t want to catch a cold before I started chemotherapy. Because it was a Sunday, there were very few trains running, and we had no option but to cycle a wet 50 miles home. But I did it – and was soon put on the sofa in front of a crackling fire whilst Dermot cooked a roast dinner. 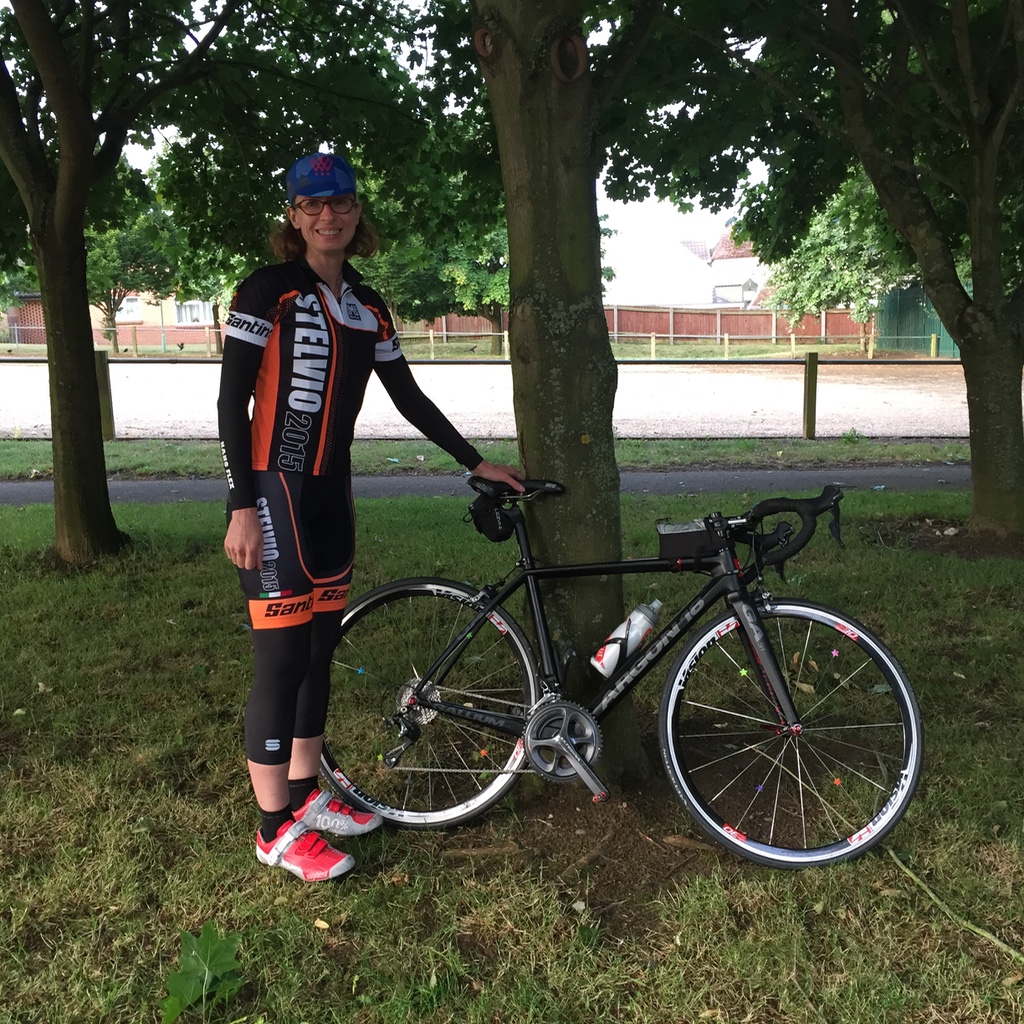 How can I have cancer and start chemo in a week when I’ve just cycled 100 miles? It didn’t seem possible.

The next 2 days were spent shopping for chemo things – comfy clothes, mouth care, things to do during chemo (and I’ll put all of this in a separate chemo blog). They were things I’d gleaned I might need from twitter advice, pinterest and googling for breast cancer blogs, and helped pass the time. The nights were spent not sleeping, and worrying about what the scans and receptors might show.

And then it was Wednesday – time to meet the consultant for all the information, and the oncologist, to learn about chemo….