This was the day I was really apprehensive about. In hindsight there were a lot of questions I should have asked, either at the time of the oncology appointment 2 days before, or by ringing the specialist nurse yesterday. But there’s a bit of me that didn’t want to bother anyone. I’d done a lot of reading on the internet about what to take to chemotherapy and how long to expect to be there, and thought it was enough. Now I think it would have been good if I had been told the following things before I left the clinic. Because I only had a couple of days to get my head around the reality of it all, I hadn’t got a list of questions to take with me to the appointment. Now I make a long list every time, so I don’t forget anything.

My browsing had told me to wear comfy clothes, with a top that has easy access to my port. This is fine in the summer when it’s warm, but in the winter, things like high neck jumpers and polo necks are out of the question, Luckily for me I can still wear cardigans as my port is in my upper chest, but if I had a PICC line in my arm, I would need short sleeves or long sleeves I could easily roll up.

I had assumed I would be there all day. I know now that there are many different types of chemo regimes for all the different cancers. I had packed a bag with enough stuff to keep me going for a weekend, but was actually only in the department for 2 hours, and barely touched any of it. My next blogs will cover what to take, the internet links that were useful to me, the tips that kind folks sent me, and the various side effects of all the drugs; otherwise you’ll be reading a small novel today.

Telling it like it is
Awonderful woman called “J”, who works at West Suffolk, had gone through exactly the same treatment as me the year before, and I met her on the Wednesday. She was great. She sat me down with a cuppa and went through the nitty gritty details of all the side effects she had, and what helped her get through them again. It makes a massive difference to hear it from a patient who has gone through it, and doesn’t hide details from you, but who does’t scare you either. She has been my text buddy though all of this, texting every day just to check in on me and see how I’m doing. I only wish that everybody had one of these amazing women in their life, and although ‘look forward’ really isn’t the right phrase, I hope I can do this for someone else and share the love and friendship that I got from J.

The night before
My parents had travelled down the night before from Scotland. It was wonderful but also quite emotional to see them, and for them to see me. They had brought with them my old sick blanket from when I was a wee girl – for those days when you’re too poorly to go to school but not too poorly to sit on the sofa watching cartoons. They’d also bought me a small cuddly toy that I could take with me to all my appointments so they would always be with me, if not in person. He’s an adorable red panda, btw.

I Skyped my brother and sister-in-law in the States late at night, as they are 5 hours behind, which is actually really useful. I can talk to family if I feel like crap at 2 am and not wake them up. They had sent me the softest pair of pyjamas from Victoria’s Secret with an eye mask, to slip on after chemo – a little bit of luxury when you feel rotten.

It was yet another sleepless night, but this time it was steroid-induced. Steroids have 3 main effects on most people:

One – they give you the munchies and make you eat a lot (wasn’t sure whether I would get this).
Two – they can make you depressed or manic or anxious or paranoid (unlikely to happen as I was only taking a short dose, but I did wonder, given my previous history of depression).
Three – insomnia. Yes, knowing my luck, and after reading a lot of blogs, I’d be wide awake from 1-4am, and I should just get used to it and do something productive in that time. So lots to look forward to!

I’d also had a mass of cards and parcels sent to me from so many wonderful people, old friends, new friends and twitter friends. It really did feel like it was Christmas every day. We strung up some ribbon over out fireplace where we normal hang up Christmas cards, and created ‘Chemo Corner’, with all the bunches of flowers I’d received below. I just had enough vases for them all. I cannot tell you how much these little words meant to me. Just a card to say – It’s crappy, and I don’t know what to say, but you’re in my thoughts’. It’s hard for people to do things as most live a fair distance away, but I’m taking up everyone on their offers to come and see me and sit with me. I imagine it could get quite lonely spending the next 5 months on my sofa.

I knew that chemo can ruin your nails – ridges, softening them, sometimes falling off, and they are often prone to infections underneath the nails. So my mum helped me paint my nails – an old wives tale that if you paint your nails a dark colour it stops the sunlight getting to them and can prevent some of the nail symptoms. I later learned that if your nails are going to go, they’re going to go. But I can’t wear nail polish at work when I’m operating, and it was Chanel dark purple nail varnish, in ‘Vendetta’, so it had to be done! 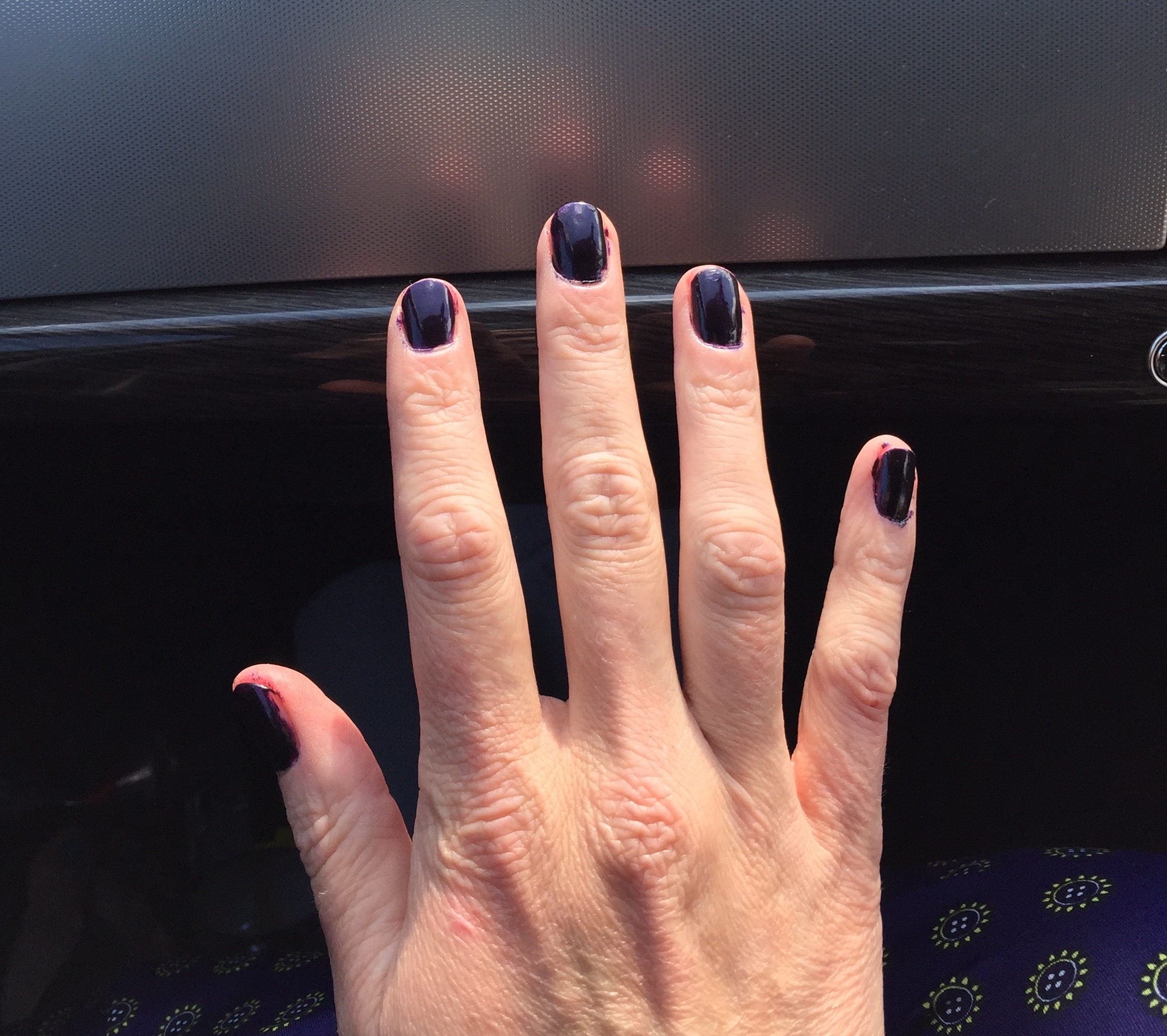 The morning of chemo
If I had known that my last cup of tea was the last cup of tea I would actually enjoyed, I’d have had about three. Unfortunately chemo alters your taste buds and leaves a metallic taste in your mouth and I now can’t stand the taste. I spent the morning packing my huge bag, together with cuddly toy, and spent the morning with my parents, walking the dogs. West Suffolk had been amazing at helping Dermot rearrange his afternoon operating list, so he could come home at lunchtime to take me to chemo, and drive me home. My slot was at 3.30pm at the end of the day, which was lovely because the unit was emptying out and not jam-packed with people.

My thoughts on the way – naive excitement at seeing what a chemo ward was like, apprehension, nervousness, and fear. This was going in to the unknown, and I would no longer be in control. I had heard that chemo symptoms can last for 2 weeks, with the second week being the worst, followed by a week of recovery. It’s an understatement to say I don’t like not being in control, and everything from now on would be out of my hands.

The chemo say unit
It was light and bright and sunny, with the most amazing comfy recliner chairs, all packed in quite tightly, with a table, infusion pump and one chair for a visitor. They don’t give you patient ID bands, like a normal ward, and everything is double checked by your name, date of birth and address. Two lovely nurses looked after me – again, lots of “#hellomynameis” action. One of them was the daughter of one of my favourite theatre nurse at West Suffolk, which was nice. I must say the radio station wasn’t my personal choice (Steve Wright in the Afternoon), but you got used to it, and I felt a bit odd that I was the youngest patient there by some years. I’d made an effort to look pretty for the session. I was miraculously having a good hair day (curly and not frizzy for once), with make-up and earrings, and felt a little out of place with the older women who were dressed for comfort, with their hats and turbans. 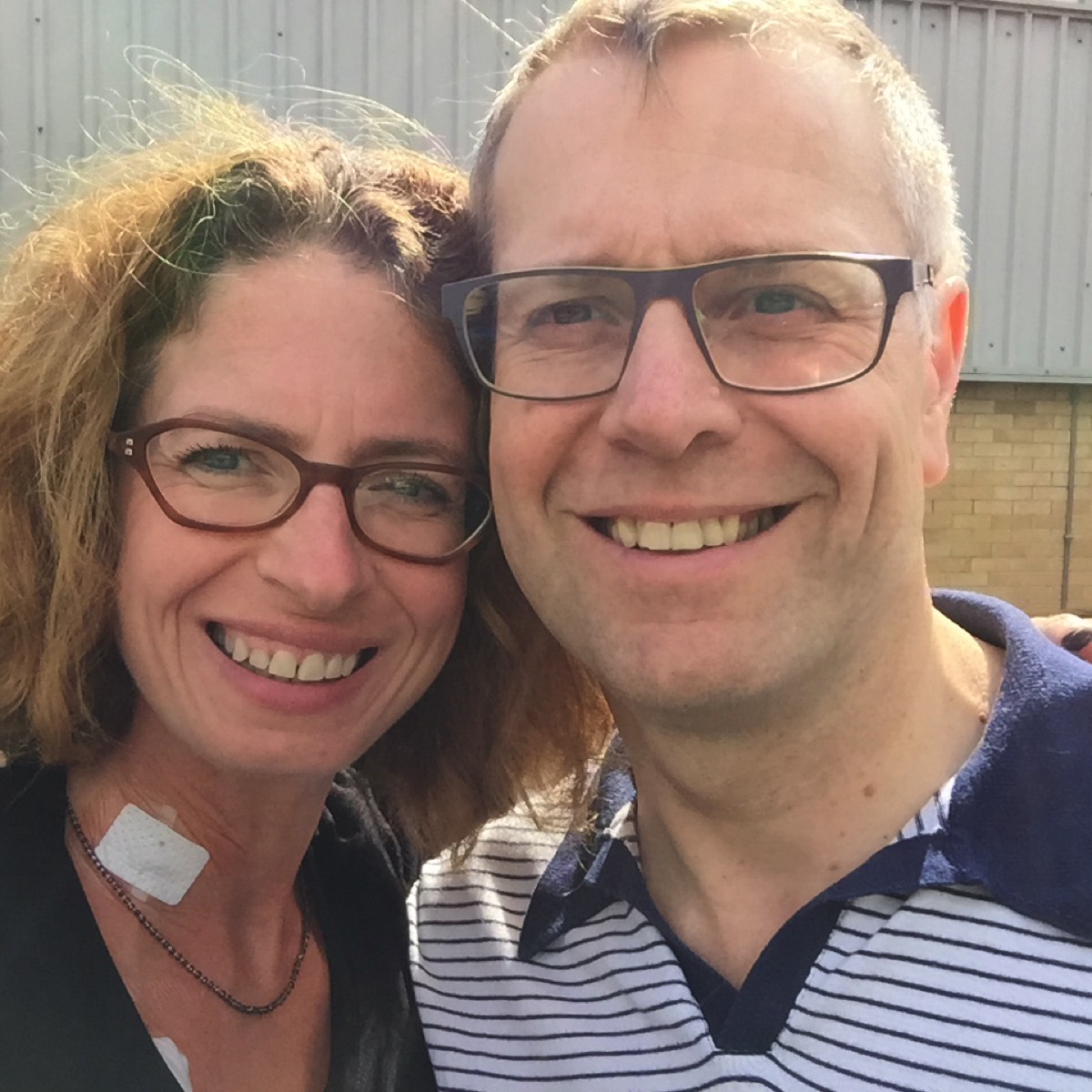 The chemo started with pills – steroids (more Dexamethasone) to prevent an allergic reaction and help with sickness, and Metaclopramide (for sickness). The port was flushed, and some fluid was run through. And then the chemo infusion started. The actual chemo infusion would take an hour, followed by a 15 minute saline infusion to flush it though. So my expectation of being there all day would actually only be 2 hours in total. Easy. I could do this. It was painless and I didn’t feel anything. I drank about 1.5 litres of water during the infusion, and planned to carry on drinking 2 litres every day in the coming weeks to help with the side effects.

Dermot was getting a bit weepy eyed at the reality of me having chemo. But just then, the lovely J turned up to sit with me, so Dermot could go off and clear his head. She had bought me a wonderful bag of chemo goodies, and we nattered for the best part of an hour, when Dermot came back to carry on the game of cribbage we had started.

Dermot taught me to play Cribbage when he proposed, and I was smashed on bubbly. I was convinced he was making things up (one for his nob, I mean, what is that all about?) and my mental arithmetic at that time was definitely under par thanks to the booze. But we like to play, and sometimes I actually beat him. It was quite funny as I was loudly declaring that he was cheating and counting wrong, and the nurses were joining in. By that time, I was the only one left, and the nurses were singing along to whatever was on the radio. It definitely wasn’t a normal hospital day unit, compared to the ones I had been in as a doctor.

Chemo party bag
The final thing I had to do was go to the toilet and put swabs where the sun doesn’t shine (nose and groin) to check for MRSA, and then get my take-home chemo party bag. Unfortunately there was no cake, fun-sized chocolate bars, tacky toys or balloons (maybe I should have gone Private – only joking!).

I was told to check my temperature every day, and to ring in if it was over 37.5. This made me feel like a proper patient. Kate Granger gave me a tip that I should probably have a bag packed ready for an overnight stay in hospital in case I got “chemo sepsis”. I’d been discussing with my parents that they should have his and hers bags packed ready to go in, just in case something happened to them, especially as Scotland was not the quick drive up the motorway for me, and could my dad be trusted to pack the right nightie, underwear and toiletries. New business idea – M&S should sell these, with dressing gowns, nightwear and undies and mini toiletries – they’d make a few bob! And here was me having to pack my own bag. There was also a twinge of sadness and regret – the first bag I thought I might need to pack was if I ever got pregnant…..

And then we were driving home, ready to play the waiting game. When will the symptoms start, and how would I feel, how would I cope…?