The ten days I spent waiting for my operation were even harder than the first time around. Not only did I have to deal with the fact that my cancer had come back and everything that might entail, but I also had to prepare myself for going flat.

One of the last patients I saw in my own clinic, whilst I was waiting to get my own biopsy results, had had a mastectomy. For the first time I actually saw her scar and her flat chest, not through the eyes of surgeon – pleased with how the scar is neat and tidy and there are no dog ears, but through the eyes of a potential patient – how on earth do you cope when you look down and see that your breast is missing? Am I really going to look like that? Shit.

How hard can it be to find a bra?
I haven’t worn a bra for over a year now because I have neuropathic pain on my chest wall. This is a nerve pain that can occur in up to 30% of patients and is a bit like sharp pins and needles down your side. Wearing a bra for any length of time is just too uncomfortable for me. However, I was trying to be positive.

My problem is that I’m a 30D, and it’s bloody hard to find a post-mastectomy bra in that size. It’s almost as if the lingerie companies (including the specialist mastectomy companies) think that small-breasted women don’t have mastectomies. I went into Debenhams and ended up bursting into tears. A lovely assistant came over, gave me a hug and showed me a bra that might work in my size that I could buy online. I just wanted the ground to swallow me up – I guess I still hadn’t come to terms with what was about to happen. I later found a small choice of bras in M&S – mostly pink and pretty, like a teenager starter bra, but beggars can’t be choosers. I bought them and shoved them in the back of my wardrobe where they still lie, untouched.

For the first week or two I had the wonderful Recobra to wear. I wore on after my implant and it was so comfy. It’s long, so the bra doesn’t rub a low scar or a drain. It comes in a HUGE range of sizes – even smaller than me, and it’s front-fastening and adjustable to allow for swelling.

Spin Doctors
The day before my op, West Suffolk Hospital had organised a local sportive, and Dermot and I had to do it, before my life would change again. We just did the 25 mile route on our tandem, and it was great to be out in the sunshine and feel normal for a while. I’m a bit obsessed about us wearing matching kit on the tandem, so we wore our ‘Spin Doctor’ jerseys and our Morvelo ‘Fuck Cancer’ socks – yes I know they’re pink but the message is important. 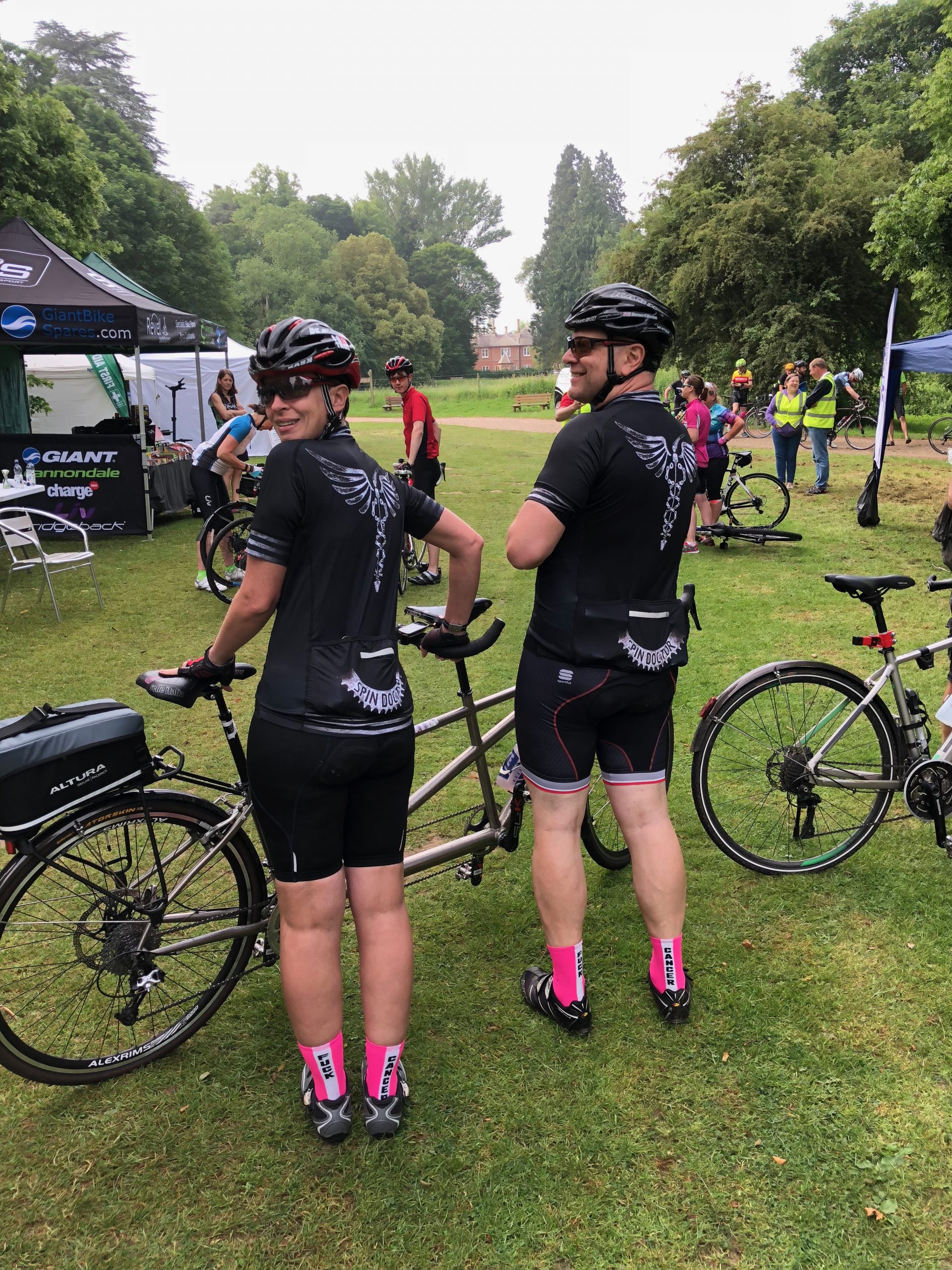 Pre-race check list
Continuing with the original triathlon of treatment (chemo, surgery and radiotherapy), I’m fairly certain this local recurrence will be treated with a whole new triathlon (surgery, radiotherapy and then get my ovaries out to swap hormone tablets). So I laid out everything I was taking to hospital like I used to do before my races. Dressing gown – check. Thank you cards and cake for the team – check. Recobra – check. 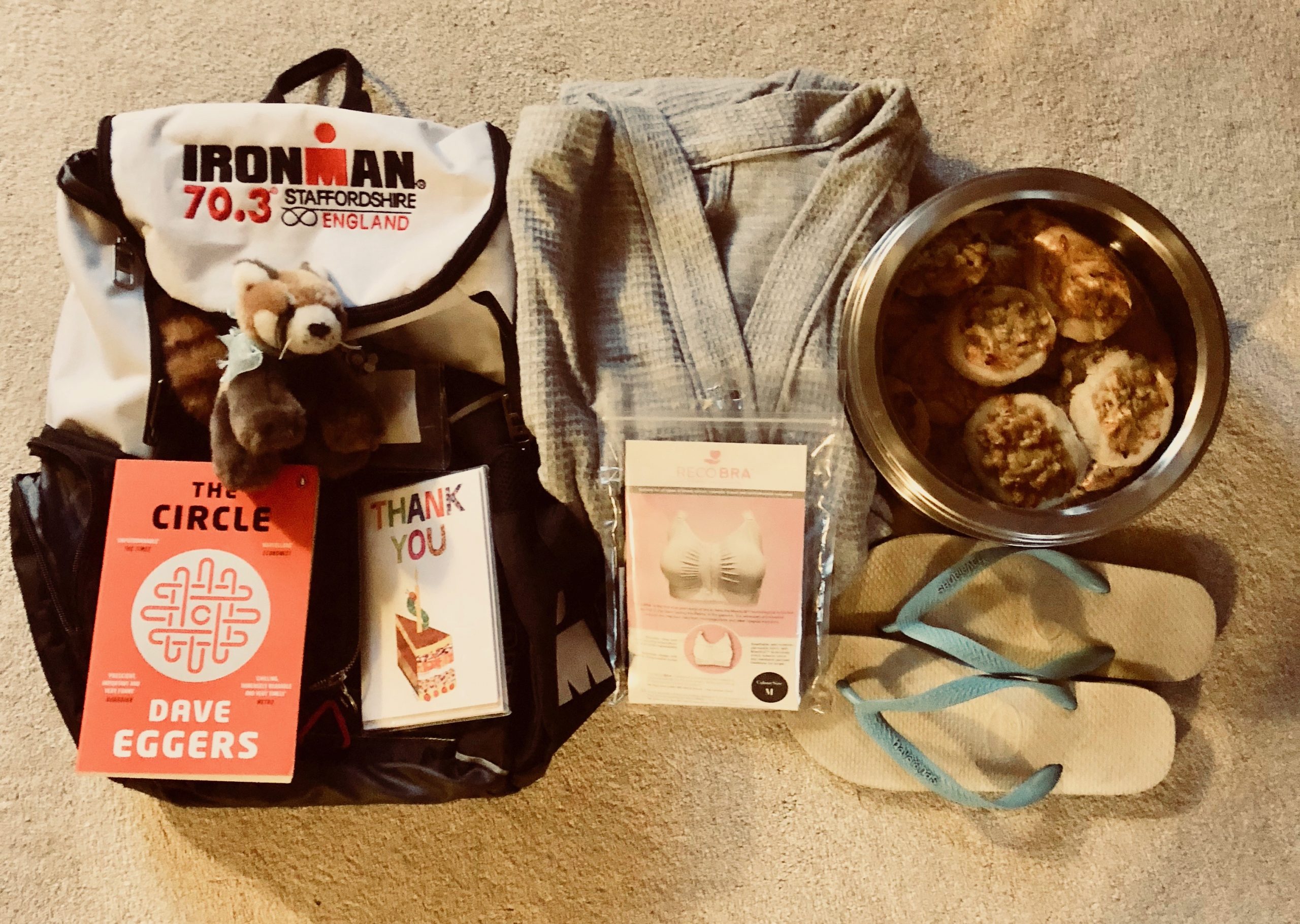 Can’t I just stay at home?
This was my fourth op on my left breast / armpit but I was still a nervous wreck when the morning came. This time was different. I would wake up without a breast. I managed to hold it together whilst the nurses were checking me in and putting my DVT stockings on, and then out of nowhere the porters arrived to wheel me to theatre. My husband Dermot had nipped to his office and I begged them to wait just a few more minutes until he returned. He came back in the nick of time, and after a quick hug and a deep breath I was on my way.

I had to wait in the holding area for about 15 minutes and it was then that the floodgates opened. I suddenly started crying, alone, behind a curtain. I don’t want to have cancer. I don’t want it to come back. I don’t want to die because of breast cancer. Shit. Fuck. Bugger. I have never felt so alone and desperate. One of the nurses came in with a bunch of tissues, and I put my mask back on. I’m fine. No, really, I am.

The operation itself was fairly straightforward. My implant was removed through my original mastectomy scar, and the armpit scar was used to cut out the recurrent nodule. I woke up on the ward with the obligatory cup of tea and nervously looked down at my chest – not ready. Not ready at all.

Back on the ward
My surgeon came to see me and told me everything went well, but she had to leave my nipple behind. Because of the previous radiotherapy, my breast skin is thin and doesn’t stretch very well. The last thing you want as a surgeon is a wound under tension that then falls apart. She checked my wound and it was then that I got a glance of my flat chest and the dressings. I was warned that I would get a seroma – when tissue fluid collects in the space where the implant was. It’s a normal side effect of any surgery, but if a lot of fluid builds up it can put tension on the scar so it needs to be drained. 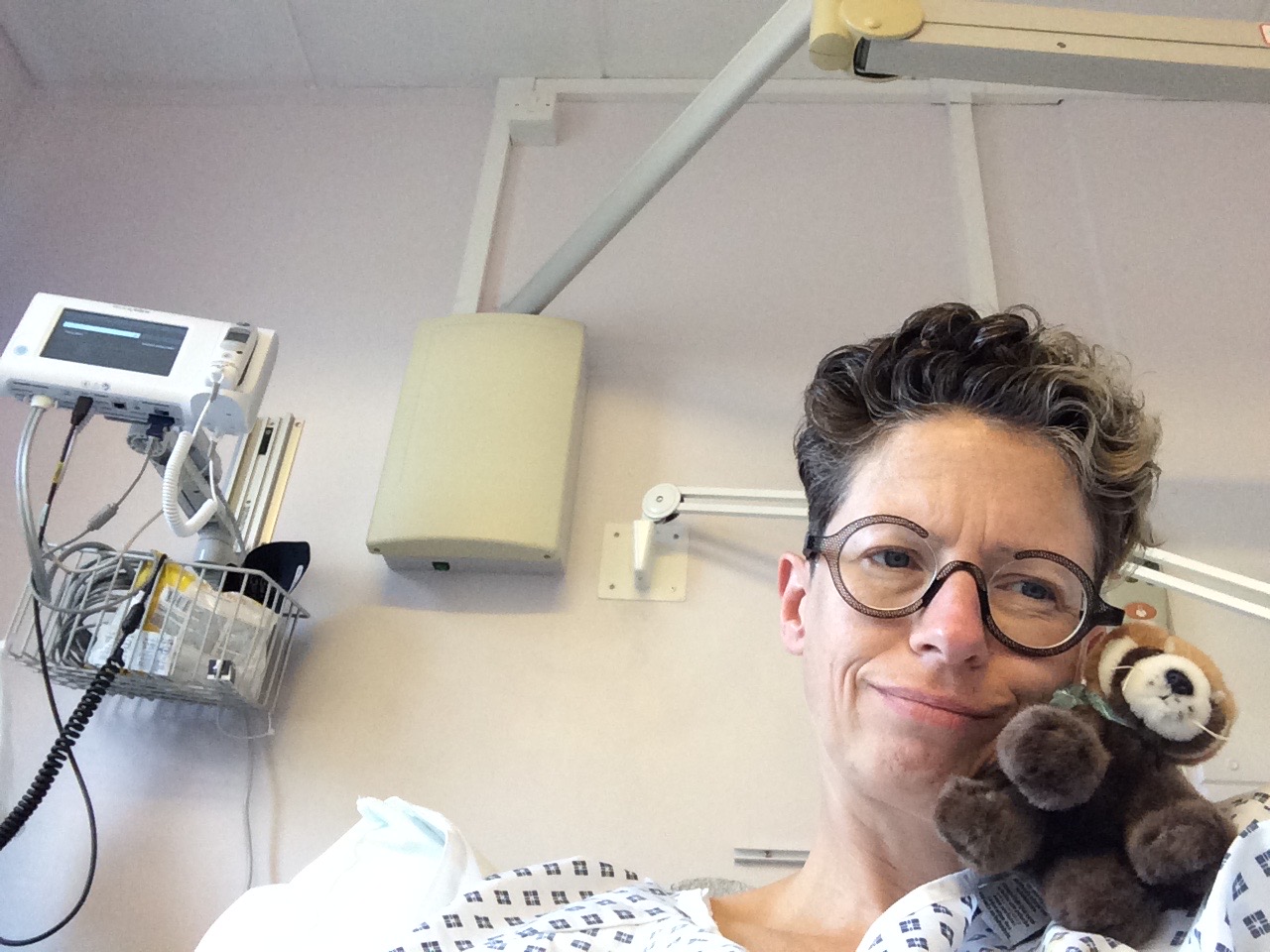 The anaesthetist gave me some advice about managing my pain post-operatively, and the lovely breast care nurse gave me a soft ‘comfy’ to put in my bra – it’s a breast-shaped material form filled with toy stuffing so it’s really light – you get fitted for a formal silicone prosthetic at 6-8 weeks when your wounds have fully healed.

Hate at first sight
Nothing can prepare you for the first time you look down and your breast has gone. Even if you think you’re going to be OK, and you can cope, it’s not on my top 10 list of favourite things to do. I just felt sad – sad at the woman I had lost, the clothes I would no longer be able to wear, sad at never feeling sexy again with my one man-boob and my one woman-boob, and then a flood of fear about whether it would come back again and what the future might hold.

Home is calling
Just as Dermot and I were about to leave, the CEO, Steve Dunn, who’s also a friend, popped his head in to say ‘Hi’ – no pressure on the nurse who was doing my discharge…. 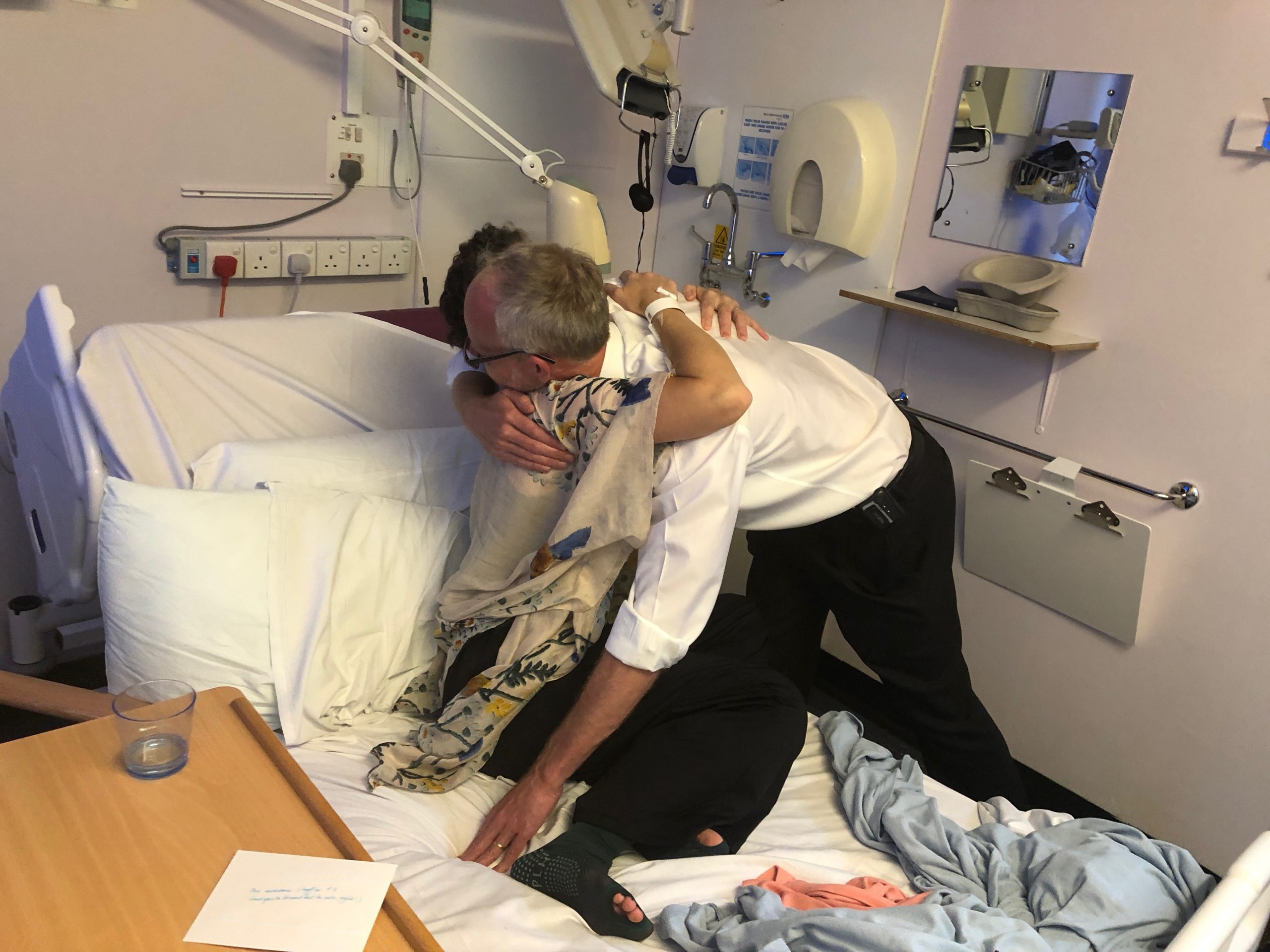 I was determined to look fabulous when I went home, despite what I was feeling inside, and had bought this lovely kimono-y thing to put on. Every little thing helps. 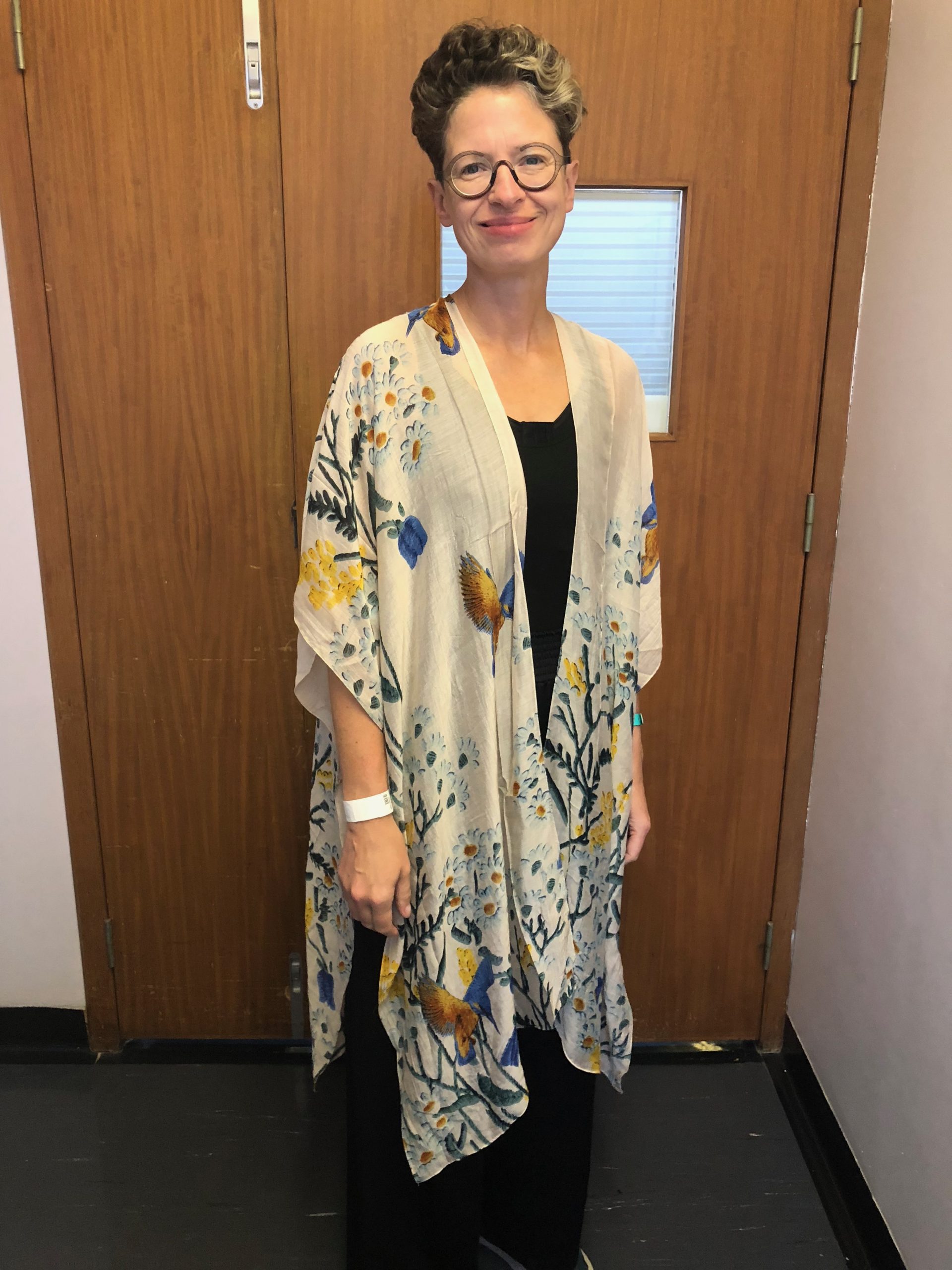