Cycle 2 – not quite as TAXing

Home » Cycle 2 – not quite as TAXing
Previous Next

Cycle 2 – not quite as TAXing

If you remember from my last blog, I jokingly asked Dermot in the car on the way home whether he would do the Park Run with me on Saturday, the day after chemo, and he said yes! I hadn’t done the Park Run (Bury St Edmunds, Nowton Park) for almost a year, and hadn’t run for a good couple of months. I’d lost my triathlon mojo in the summer and had to pull out of a few events. And now I was suggesting that we run the day after chemo. 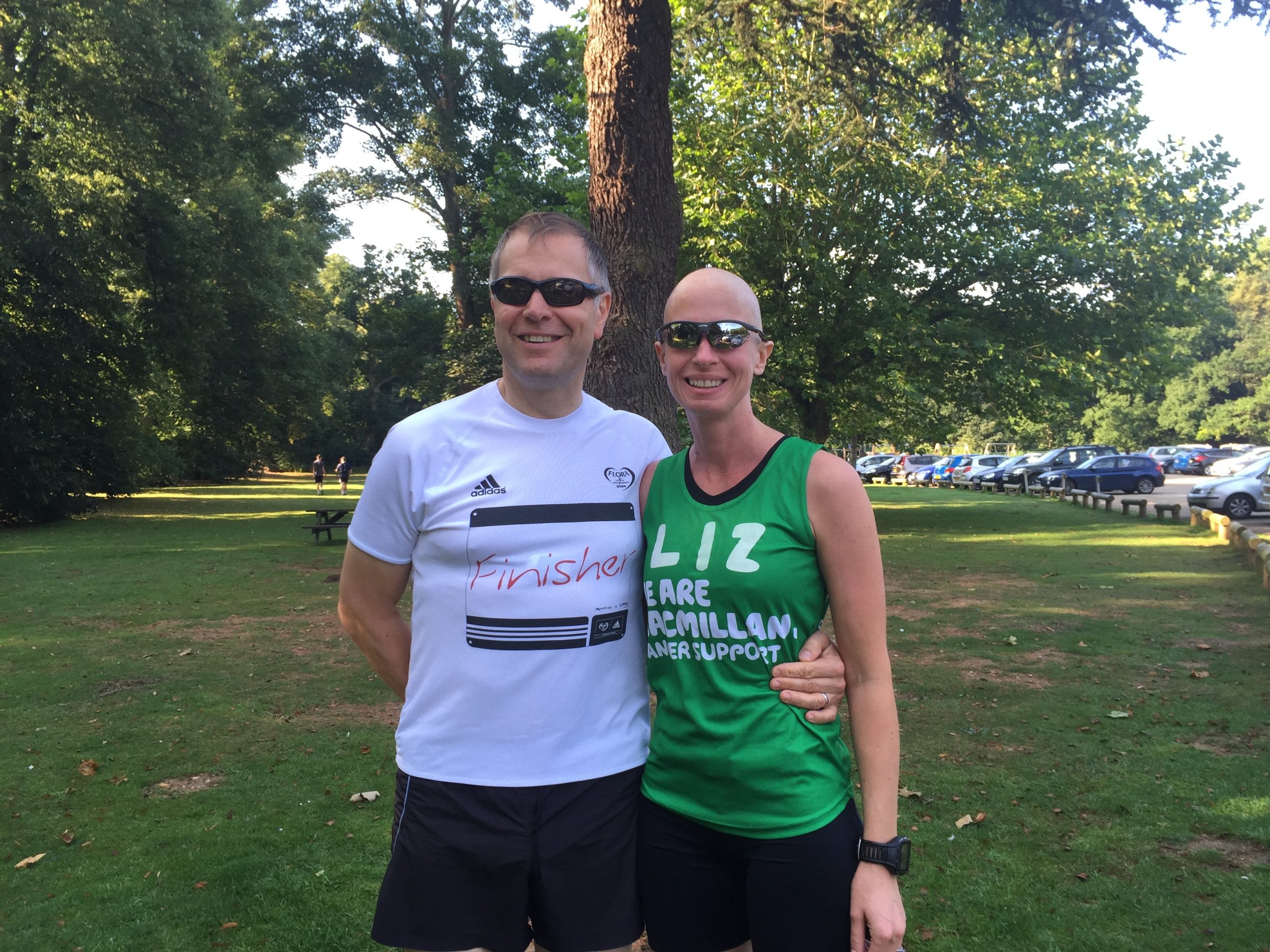 I got Dermot registered on the site, and dug out my Macmillan running vest from the London Tri last year. It was a beautiful, hot sunny morning, and I didn’t feel embarrassed standing at the start with my bald head on display. Dermot ran with me the whole way round, and I did a very respectable time of 36 minutes (my best to date is 30 minutes so I was really pleased). This is the Strava file.

I didn’t walk and although it was a struggle, I loved every minute of it. Some of the spectators called out my name to cheer me on, and a lovely man who had been treated for leukaemia 10 years ago gave me a hug at the finish (to inaugurate me into the ‘Cuddle Club’)! I resolved to do the park run every week that I felt up to it, and to volunteer once I’d done ten. The volunteering is a really important part of it, and I want to make sure I give something back to the community.

It’s fair to say I was knackered for the rest of the weekend – like waiting for a bomb to go off and the side effects to kick in. The metallic taste was back with a vengeance on the Friday night, and the steroids were bringing the insomnia as usual. 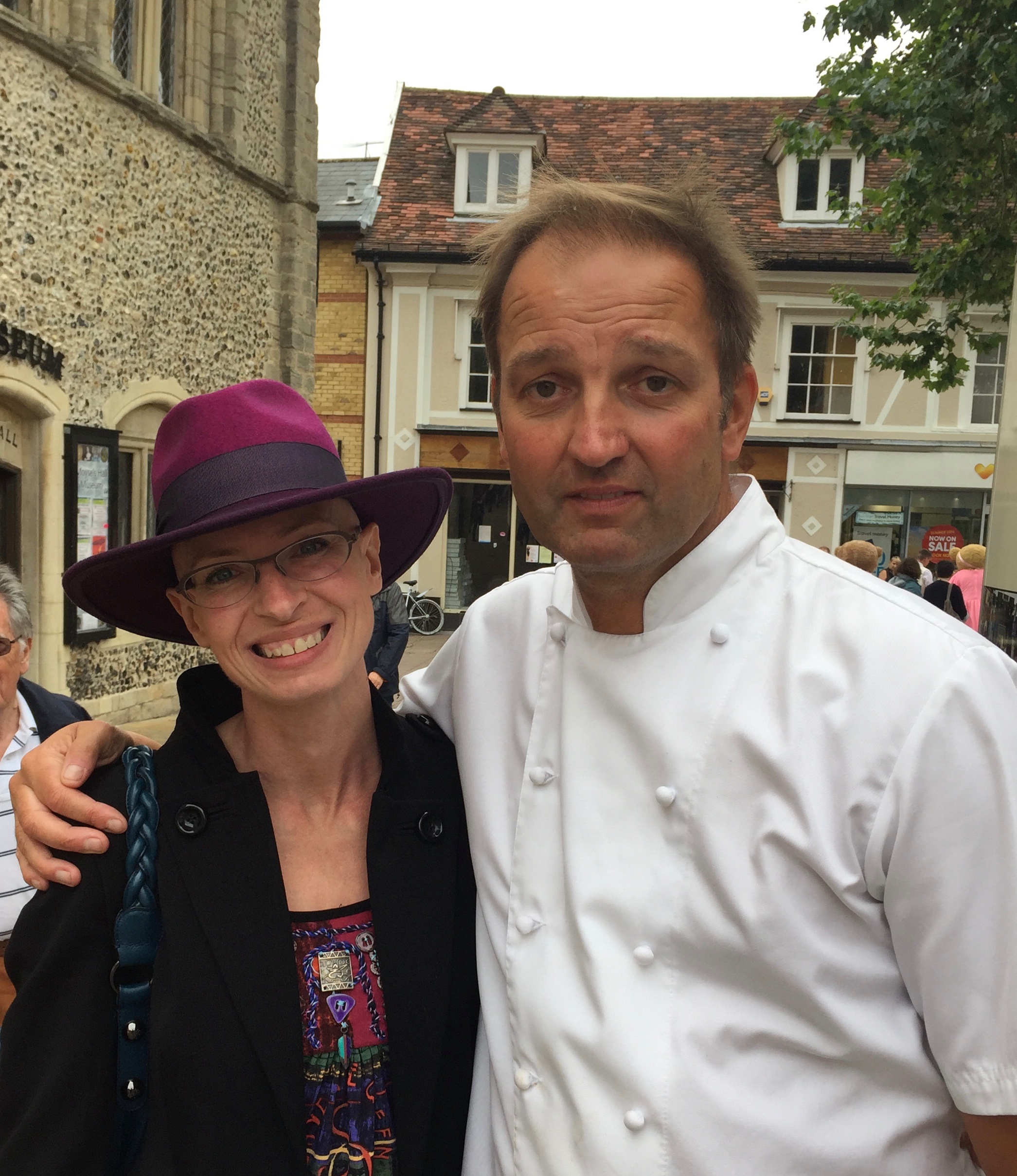 On the Saturday afternoon we went in to Bury St Edmunds to the Food Festival – which was great for Dermot but not so good for me as food was the last thing I wanted to go near. We watched a food demo by Galton Blackiston, the chef at Morston Hall where we got married, and we got to say ‘Hi’ to him at the end. It was lovely to remember one of the happiest days of my life.

Fame at last
On the Sunday, we listened to the Wittertainment podcast from the ‘Kermode and Mayo’s Film Review’ on Radio 5 live. Dermot first introduced me to the podcast when we were dating, and it was our ‘thing’ – we’d listen to it in the car, hoping for a Kermode rant to make us laugh. I’d decided to write in to them a few weeks ago, asking for films to watch during my good weeks between chemo sessions, on the off chance it might get read out. And it did!!!! About 8 mins from the end of the podcast, the Good Doctors gave me film advice – Local Hero, Mary Poppins and Amadeus. I couldn’t stop grinning. I finally had an excuse to make Dermot watch Mary Poppins. For a man with a 30 year-old daughter, there are a lot of classic films he hasn’t seen (Wizard of Oz, Mary Poppins, Sound of Music – just shocking!!!).

Earlier that morning I’d seen through twitter that Roy Lilley had mentioned my blog as one of the must-reads, and I thought that was fame, but Wittertainment is a much bigger deal! Sorry, Roy.

Not quite the perfect patient
During the first round of treatment I was the model patient, drinking 2-3 litres of water a day, brushing my teeth (with Biotene toothpaste and baby toothbrush) and using a mouthwash (Difflam) after every meal. This time I was tired of feeling tired, and didn’t drink anywhere near as much during the day, and I think this made me feel worse. My appetite was bad because of the change in taste, a sore mouth and furry coat of white mushrooms on my tongue, and I wasn’t eating as much as I should have been. I had a permanent sore throat and my eyes were starting to get itchy and sore.

It was great to only have to stab myself once with the bone marrow-boosting injection, instead of 6 times, and I noticed a MASSIVE difference in some of my symptoms. The headaches were tolerable now. The severe bone and muscle pain was reduced, and the pain in my jaw had gone. I still felt flu-like and hung-over, but it was tolerable. I couldn’t believe what a change there was compared to the first round of chemo, just by swapping the GCSF injections.

Guilt-ridden
Mentally I felt pathetic and sorry for myself. I also felt guilty. I was having a hard time coping, and I only had myself to look after, as I have a husband who enjoys cooking and is good at it, and have a cleaner who helps with the washing and ironing. How do women with babies and small children, or husbands who aren’t house-trained’ cope? I guess they just do, because they have to, but it can’t be easy.

I was also feeling guilty for getting cancer and turning my husband’s life upside down. He didn’t sign up to this when he asked me to marry him. I know the vows state ‘in sickness and in health’, but he’d already had to cope with my depression, and now I was asking him to cope with breast cancer as well.

Losing the tools of my trade

As a surgeon, my hands are incredibly important to me. They’re also important for all the other things I do – playing the piano and flute, sewing and quilting and knitting, baking and kneading bread. And suddenly they were falling apart, literally. 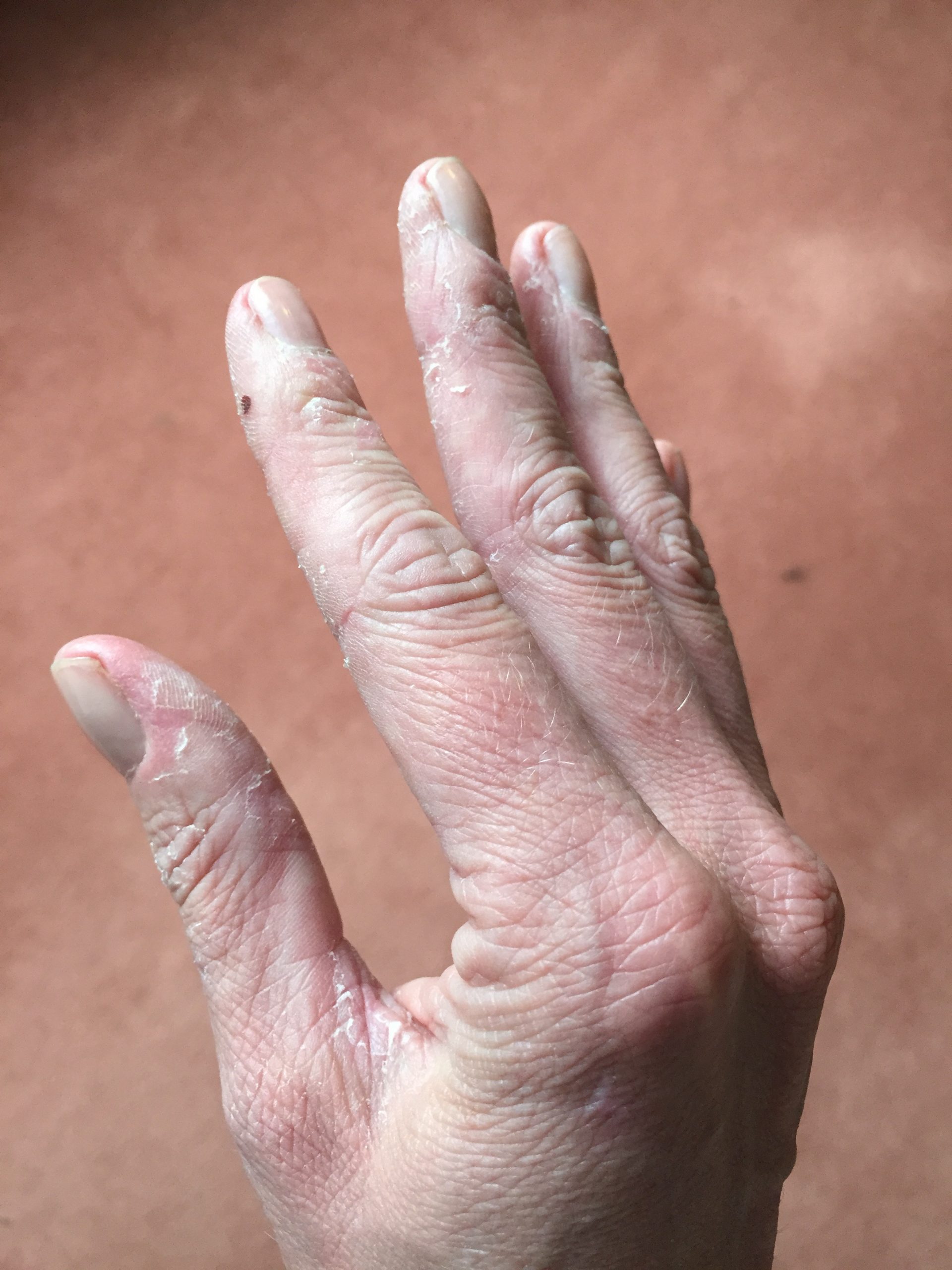 My hands ached all the time, and the skin literally peeled off. It started just under my fingertips and was like having sunburn that peels. The skin underneath was numb – I couldn’t really feel anything properly. A few days later, the skin on my fingertips thickened and became quite calloused, so my fingertips were numb for a different reason. The skin in the creases of my thumb and fingers thickened as well so it was hard to curl my hands up. They felt like ‘little old lady’ arthritic hands. I had to ask Dermot to open bottles and cans for me, as I couldn’t.

Ridges had started appearing on my nails, and my nails were very sensitive if I knocked them. It was even becoming a struggle to life the lid on my shower gel in the morning. I’d stopped using the coloured nail varnish (too much effort to keep my nails looking nice) and had switched to Sally Hansen Nail Strengthener, as it was lying around in the bathroom, and was clear. And I am going through hand cream like there’s no tomorrow.

Hung-over again
For the rest of the week, I felt like I had a flu, had run a marathon and had drunk 1 bottle of gin (instead of the 2 bottles in the first cycle). The insomnia was back again thanks to the steroids, but I was learning to try to stay in bed and keep my eyes closed and hope I’d go back to sleep.

I still managed to walk every morning, and sometimes walk again, with the dogs (who must be bored out of their minds and frustrated, knowing their mum is in the house but isn’t talking to them or playing with them – more guilt), but my legs and arms felt heavy and sore. The chemo fog came, and I couldn’t concentrate on anything, and I was back on the laxatives (Movicol this time, which didn’t have much of a taste but I still hated taking it).

Dermot was on-call for general surgery this week, and I was grateful for all the cooking we had done the week before to freeze meals. I could simply defrost whatever I fancied to eat, which meant Dermot didn’t have to cook if he’d had a busy day.

Too hot to handle
I knew that chemo could make me menopausal and that some women have hot flushes. I’d seen my mum go through it and was not looking forward to my own menopause. Yet here it was. Bring on the sweats. It is very odd, being so out of control of your body. I know one’s coming seconds before, and then I’m lifting up my top or flapping my neckline to try and cool down, and panting like our labrador. When the sweat dries, I start shivering as I’m so cold. I get one every hour or so, which isn’t too bad, but they wake me up at night, on the hour, which is just perfect when tied in with the steroids. And I wake up on soaked, sweaty sheets, dreaming of a fairy who would change them every day.

I will have 5-10 years of this, as the hormone tablets that I’ll take after the chemotherapy and surgery will continue to make me menopausal, with no relief from HRT because my cancer is sensitive to oestrogen. Now I understand why my mum would always head for the freezer aisle whenever we went shopping! Surely having cancer and chemo is enough – but no, the menopause is an added extra. I’m so lucky!

Towards the end of the week I began checking my temperature more frequently. One week after the first cycle I ended up on the oncology day unit having antibiotics for possible sepsis. I was eager to avoid this, but had my bag packed, just in case. And then Friday came….