Home » FEC chemo and a cold don’t mix
Previous Next

I really, really didn’t want to turn up to chemo today. After scaring myself by reading blogs and forums at the weekend, I was nervous. It was a new round of chemo drugs called FEC, and I was back to not being in control. For those of you who know me, you’ll know I don’t cope well when I’m not in control.

Infusion time
FEC is given differently to Docetaxel. It consists of a load of syringes that are slowly injected into your vein by one of the fabulous chemo nurses, instead of being run through a drip. It was also quite fast to do, even more so for me because I have a central port instead of a PICC line in my arm, and the chemo was over in an hour or so. 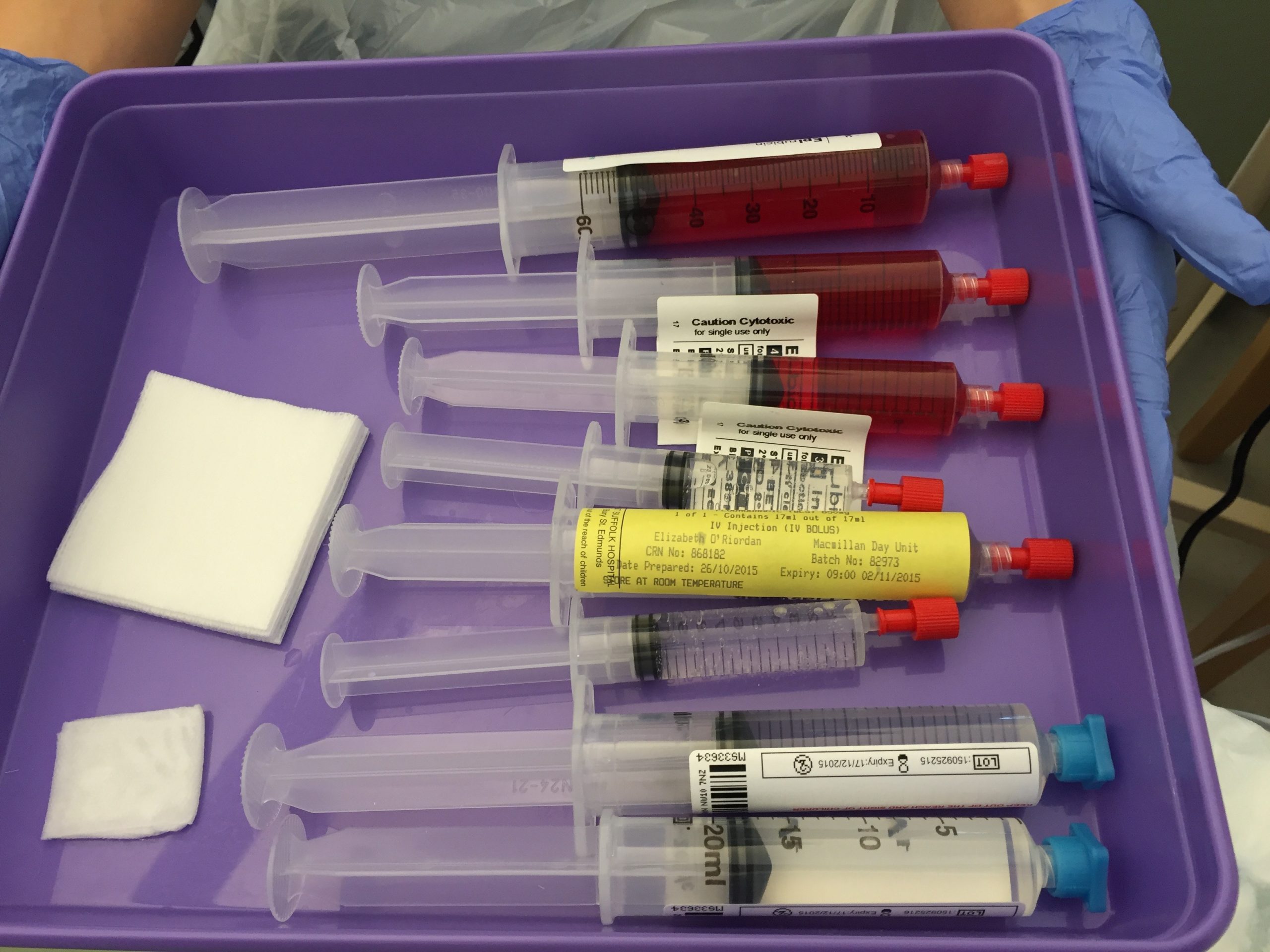 The whole thing was quite intimate, because the nurse has to very sit close to me to access the port in my chest wall. She was lovely, and we chatted and gossiped the whole way though, so Dermot could pop back to work and tie up some loose ends. It would have been hard for him to chat to me, as the chemo nurse was sat right in front of me.

It was actually lovely to have some one-on-one time with the nurse and get her perspective on how bad the FEC was going to be. She reassured me, and said that for most people the effects were over in 3-5 days, instead of the full week, and that the nausea should be controlled by the Ondansetron and steroids they were giving me. On the forums, women who have had FEC had raved about a wonder drug called Emend to conquer the nausea, but it wasn’t offered to me, and I didn’t want to ask. I put my faith in my oncology team who have given this chemo to countless women before me.

Red wee
The first drug that is given, Epirubicin, is bright red, and it makes your urine go bright red. I was told about this, but thought it would take a couple of hours to happen. Oh no – when I went to the loo before going home my wee was already scarlet! I had momentarily forgotten it would happen and got quite a shock. The chemo party bag was smaller this time – less steroids and a smaller dose (so hopefully more sleep), and the usual laxatives and antibiotics, antifungals, and my GCSF injection.

Not long to wait
Unlike the Docetaxel, when I had a couple of days before the chemo kicked in, FEC was instant. In the car on the way home the nausea started, and it lasted for a week. I’ve never been pregnant, but I can imagine it’s a bit like morning sickness. I didn’t actually want to be sick, but just permanently felt sick. None of the tablets touched it. I found this really hard to cope with.

Some women eat through the nausea to relieve it, but I was completely put off my food. I spent the week barely eating, trying to find a drink that would help, and discovered tonic water, which I drank gallons of (minus the gin, of course). Dermot would like me to point out that he was the one who persuaded me to try tonic water, as I thought I would hate it. But I was wrong, and he was right. He’s a very clever man…

Chills and fever
That night Dermot developed a cold, and decided to sleep in a separate room to try stop me catching it. But it was too late. The next day I got the cold as well, and I couldn’t tell what was making me feel lousy – that, or the chemo. I spent the week shivering in between the hot flushes, with a runny nose, sore throat and sinus headache. I had thought that FEC wasn’t meant to have as many physical side effects, but with the cold, I couldn’t distinguish between the two.

It was a miserable week, but we both slowly got better. I did find that I was a lot more tired that I had been on the Docetaxel, and it was a struggle to get off the sofa at times. Chemo brain was back with a vengeance, and the taste in my mouth was now chalky instead of metallic. I was desperate for something to clean out my mouth and take the coating away, but nothing worked.

The good weeks
I finally turned the corner after the weekend, and got a bit of energy back, which was a relief as when I’m in the middle of chemo, I never believe that I will come through it – just the sheer exhaustion and helplessness makes everything a challenge. But I did. On a positive note, my nails weren’t as sore, and the skin on my fingertips had stopped peeling, although my nails were soft and my big toe nails were thick and crumbly and starting to lift off (yuck). My eyebrows were also starting to fall out, and I was getting very frustrated with Dermot when he couldn’t understand me. I had asked him one night whether he had put plates in the oven to warm when we were cooking dinner, but had actually said ‘potatoes’ instead of plates, and couldn’t work out why he was giving me an odd look. It made perfect sense to me!

4 years and counting
Our wedding anniversary fell in the middle of the good weeks, and Dermot surprised me by taking me back to Morston Hall in Norfolk. This is where we went for our first weekend away as a couple, and it’s where we got married, so it’s a special place for us. It’s right on the coast, and has kennels for the dogs. I was a bit worried that the Michelin-starred food would be wasted on my taste buds, but the chefs were amazing. They did separate meals for me and my chemo taste buds, and I actually managed to eat almost everything. We even got an extra ‘Happy Anniversary’ chocolate cake. Divine food, fabulous service. 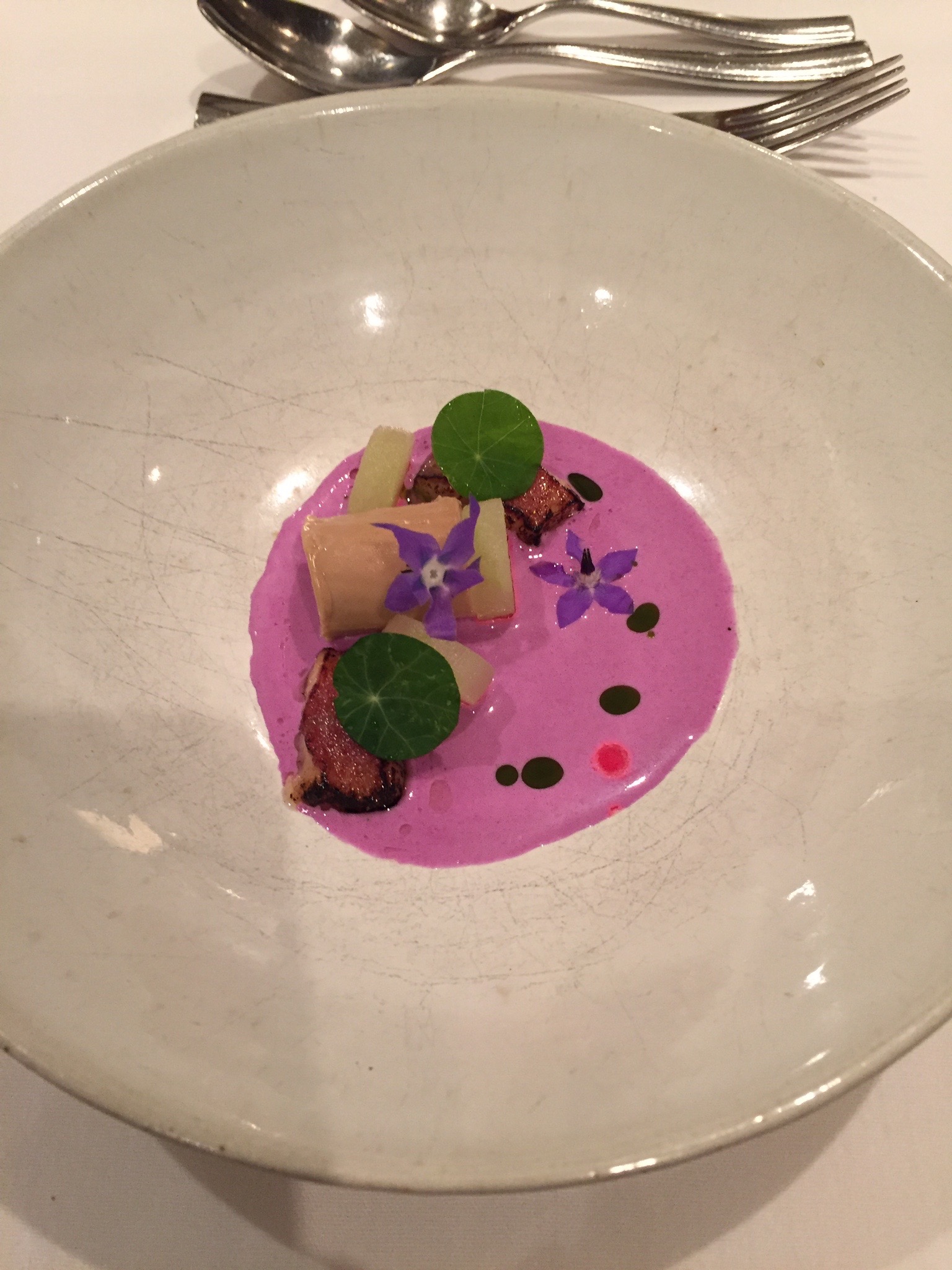 Just to switch off and have an apple-free weekend was heavenly, and we blew the cobwebs away with long dog walks on the beach at Holkham. We even did the local park run at Blickling Hall to help make room for dinner on the Saturday night. 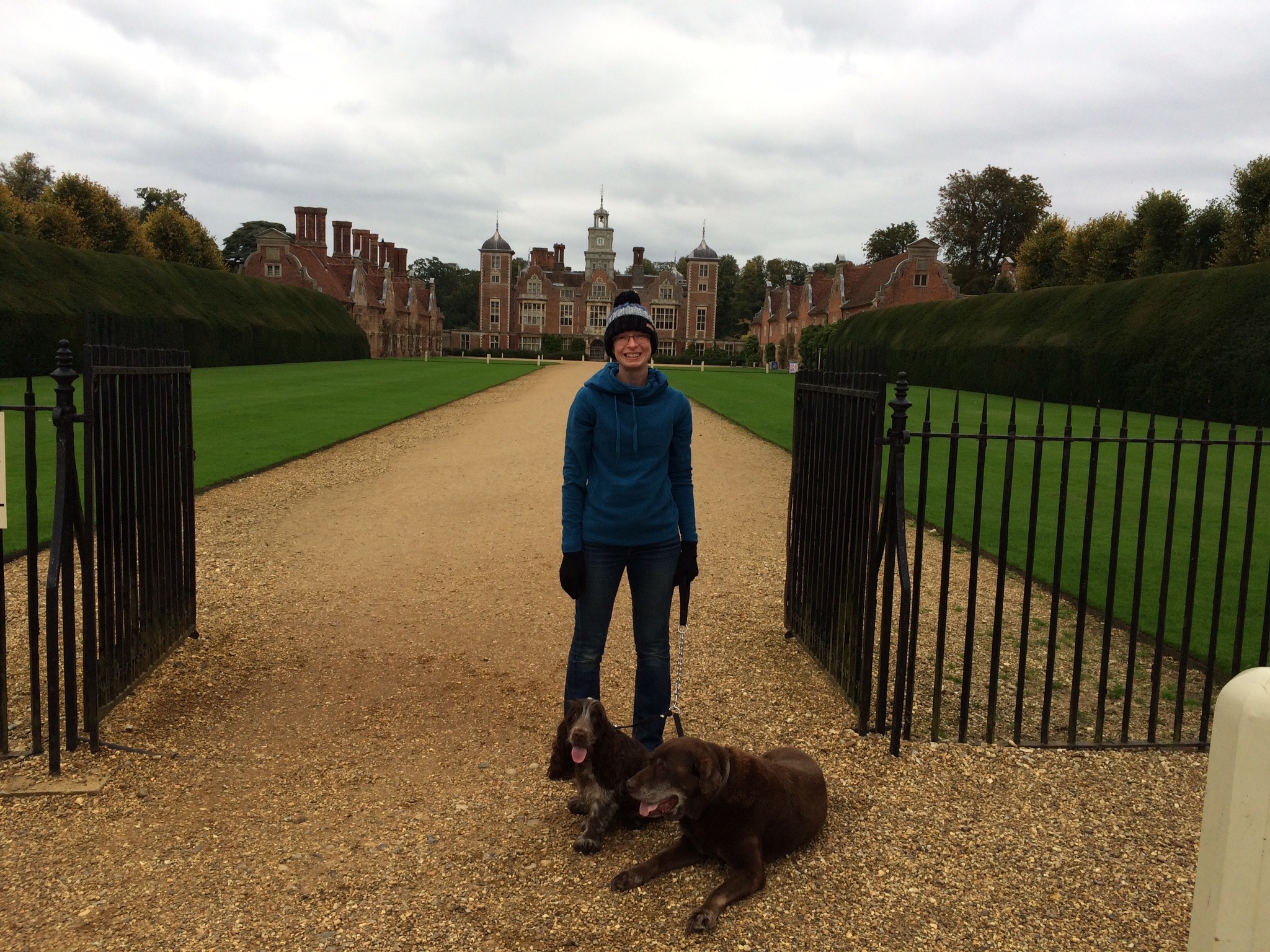 Lady of the manor at Blickling Hall

I’ll make someone a good little wife one day
This is a tongue in cheek phrase that one of Dermot’s uni friends says, but it sums up what I did to fill the time in my good days. After spending a week on the sofa literally watching time go by without the energy or concentration to do anything other than blink and swallow, I was desperate to be productive. I went into housewife overdrive, and finished lots of craft projects that had been cluttering up the house. I finished a quilt top, I knitted a jumper (and this one might actually fit me for a change!), I baked some biscuits for the junior doctors as Dermot was on-call all week, I tried making brioche (oh my god have you seen how much butter goes in to one of those…) and filled the freezer with food again. 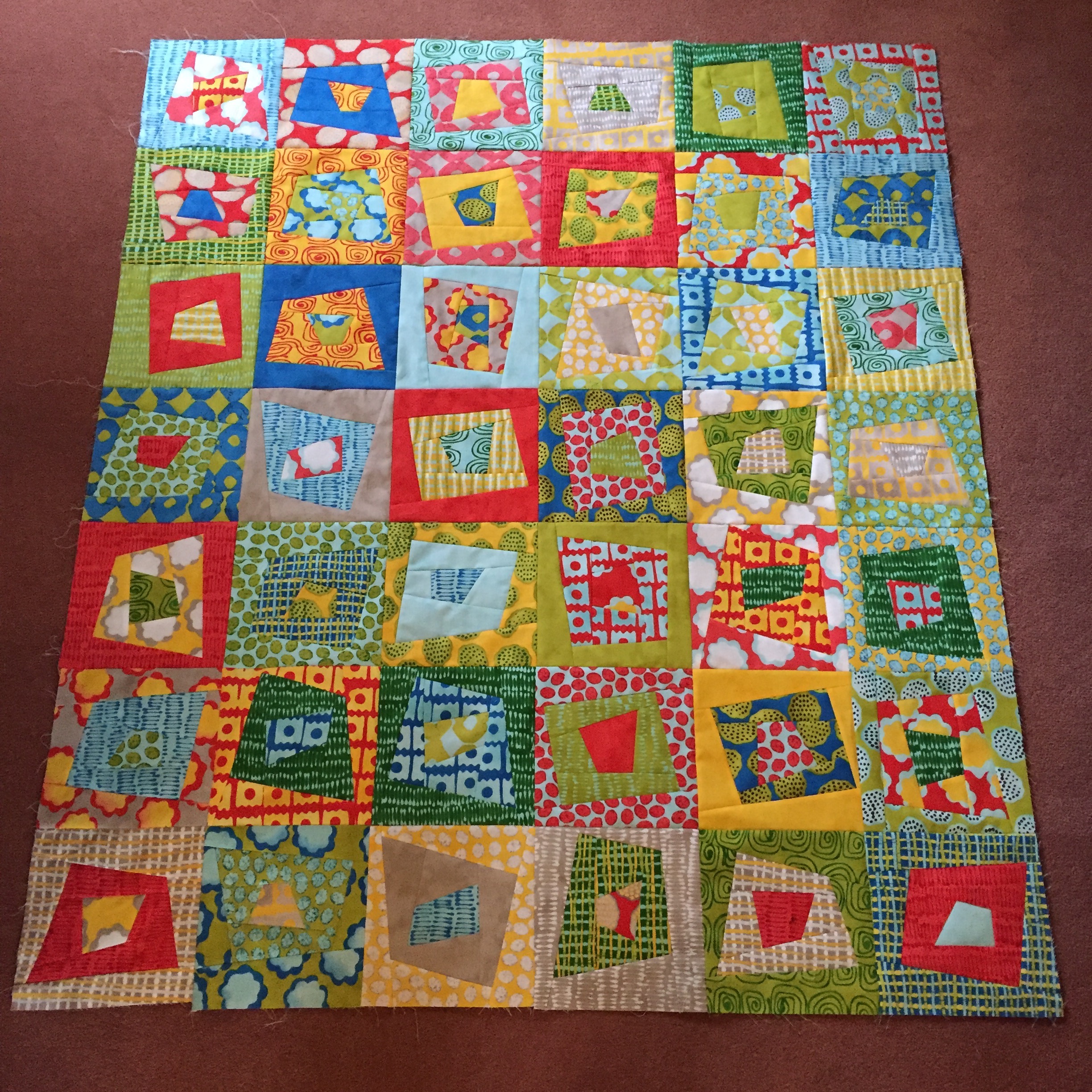 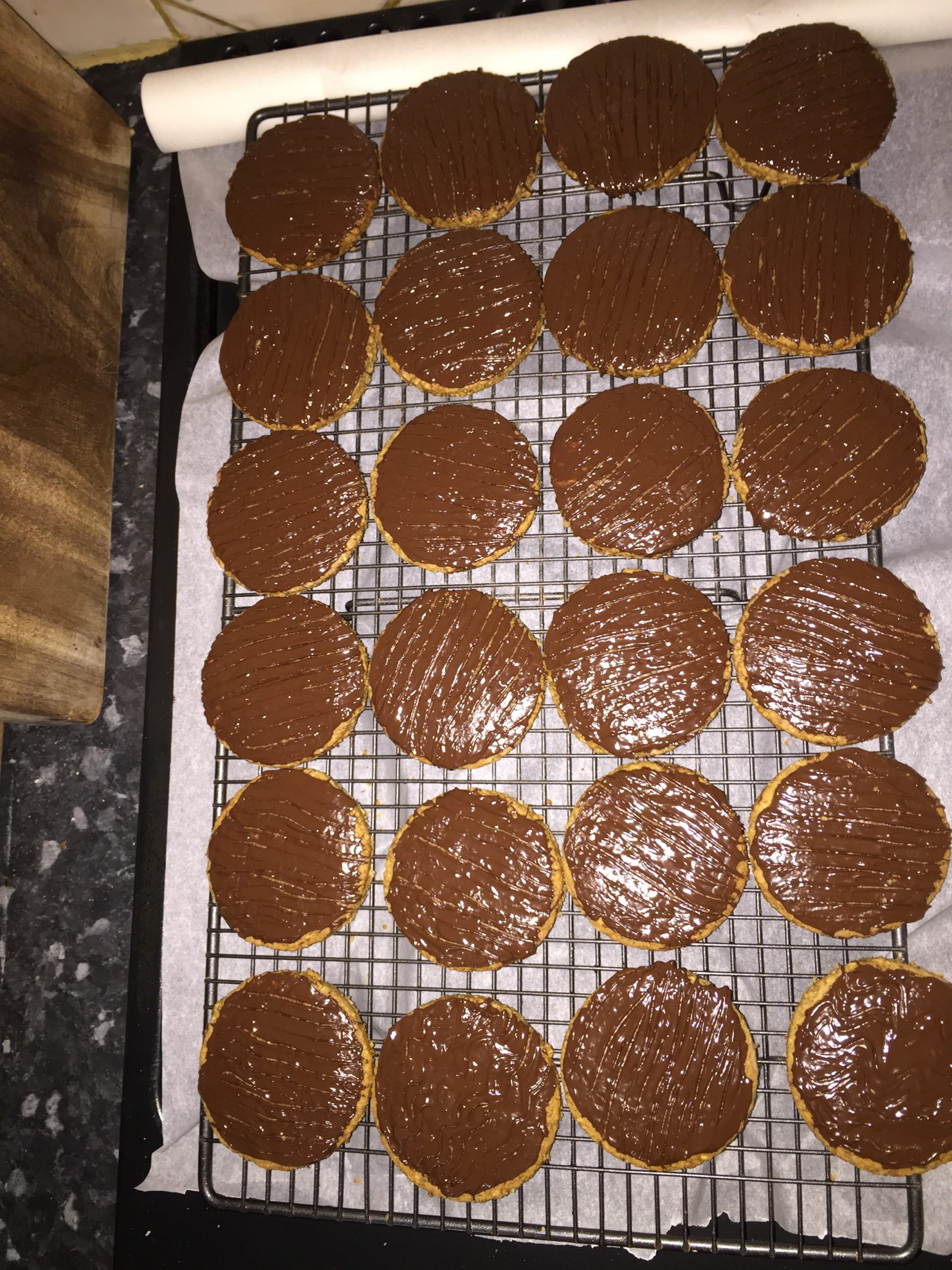 Chocolate digestives – but none for me 🙁
Justin Gellatly recipe

The final, very good week, as ever, was full of hospital appointments, most of which were concerned with my surgery – what am I going to have, who’s going to do it and where am I going to have it. I have been wrestling with this decision since I was diagnosed, and I’ll write about that separately. My bloods this time were completely normal, with no anaemia and a high (healthy) white cell count, so the dreaded bone marrow boosting injections are definitely doing their thing. I’d explained just how rotten my nausea was, and I was prescribed Emend to take for the next cycle to see if that would help. Let’s hope the super drug works.

The one fly in the ointment was the date of the next chemo. I’d moved this round to Monday so I could go to a conference, but expected the other 2 sessions to go back to Fridays. This hadn’t happened. We rang to see if they could squeeze me in, but the chemo unit was full on Friday, so it was back to Monday. Although this was ‘good news’ in that I had an extra good weekend, for me it just meant 2 more days of waiting, and I was grumpy and miserable. But, 4 down, 2 to go…..