The language of cancer

Home » The language of cancer
Previous Next

The language of cancer

Firstly, I realise that I’ve left those of you who don’t follow me on Twitter or Facebook anxiously waiting to hear the results of my tests, and I’m truly sorry. I’m delighted to be able to tell you that everything was clear, and my lymph nodes were just reactive – enlarged because of a bad cold I had.

I now feel really guilty about sharing the anxiety and dread that I was feeling. It’s bad enough that my family and close friends had to suffer with me, and I didn’t need to bring everyone else along for the ride. At the time, I wanted people to know just how strong the scanxiety can be, and how we have to carry on as if everything is normal whilst waiting for the results. If there is a next time, I promise not to do it in real time!

I want to talk about something else this week, and that is the language of cancer. Dermot, my husband, introduced me to the amazing podcasts between Eddie Mair and Steve Hewlett. Eddie does the PM show on Radio 4, and Steve was an amazing journalist. I say was, because he sadly died this week. For the last year, he and Eddie have had weekly chats about his diagnosis of oesophageal cancer. Listeners have followed him on his journey which most recently involved trying to get accepted on a new clinical trial at the Royal Marsden which was sadly stopped because his cancer had quickly progressed.

Those half hour chats are some of the most amazing things I have ever listened to. Two friends honestly talking about life, death and the universe. They’re not mawkish or sentimental, it’s just how one man lived his life with terminal cancer. Steve died on Monday, and both Dermot and I had grit in our eyes as we listened again to his last podcast the week before. I tweeted to show my respects, and then came across a tweet from the BBC saying that Steve had lost his battle against cancer. And I got angry, and replied with this… 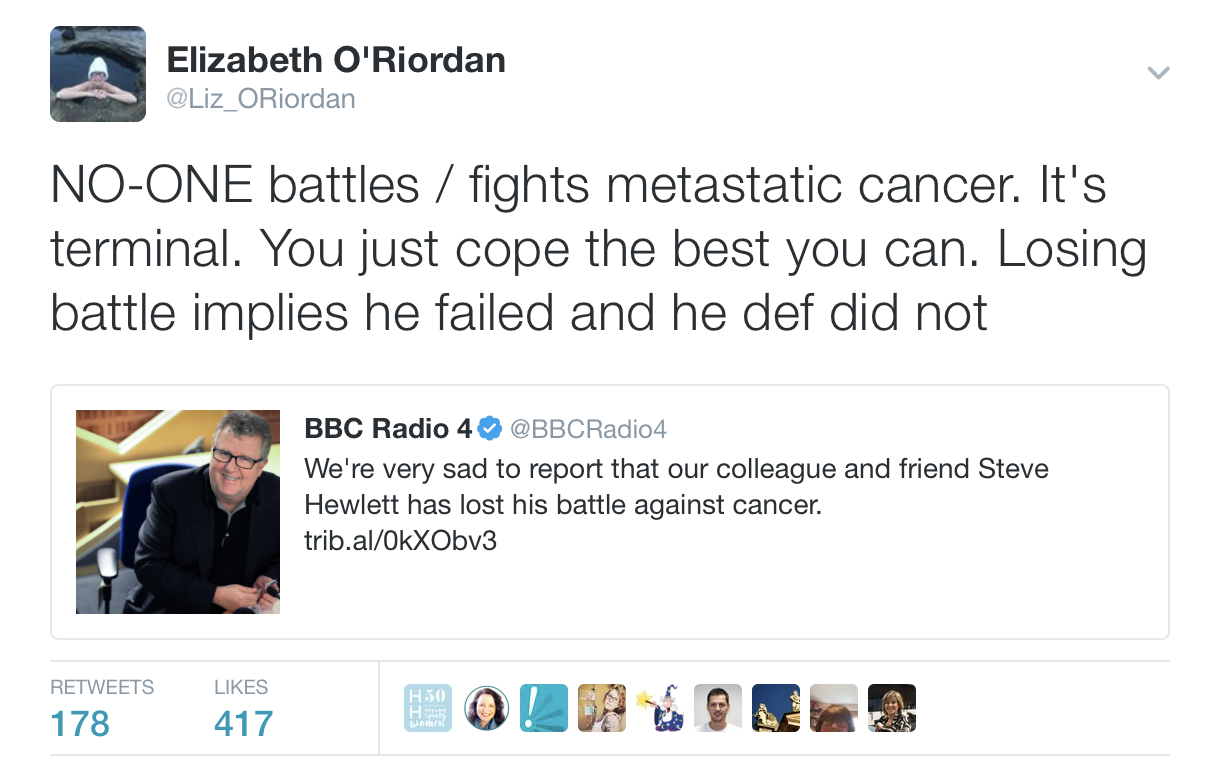 And it created a mini-storm on Twitter. So many people agree with me that the battle terminology is wrong, and want to know why the media keep using it. Whereas others with terminal cancer say that they are fighting to live. It’s a really tricky subject, and I wanted to explain myself a bit better in more than 140 characters.

Firstly, one of Steve’s friends, a fellow journalist called Nick Robinson, posted this letter on Facebook which is beautiful and brilliant and clearly says that both he and Steve knew that cancer wasn’t a battle. 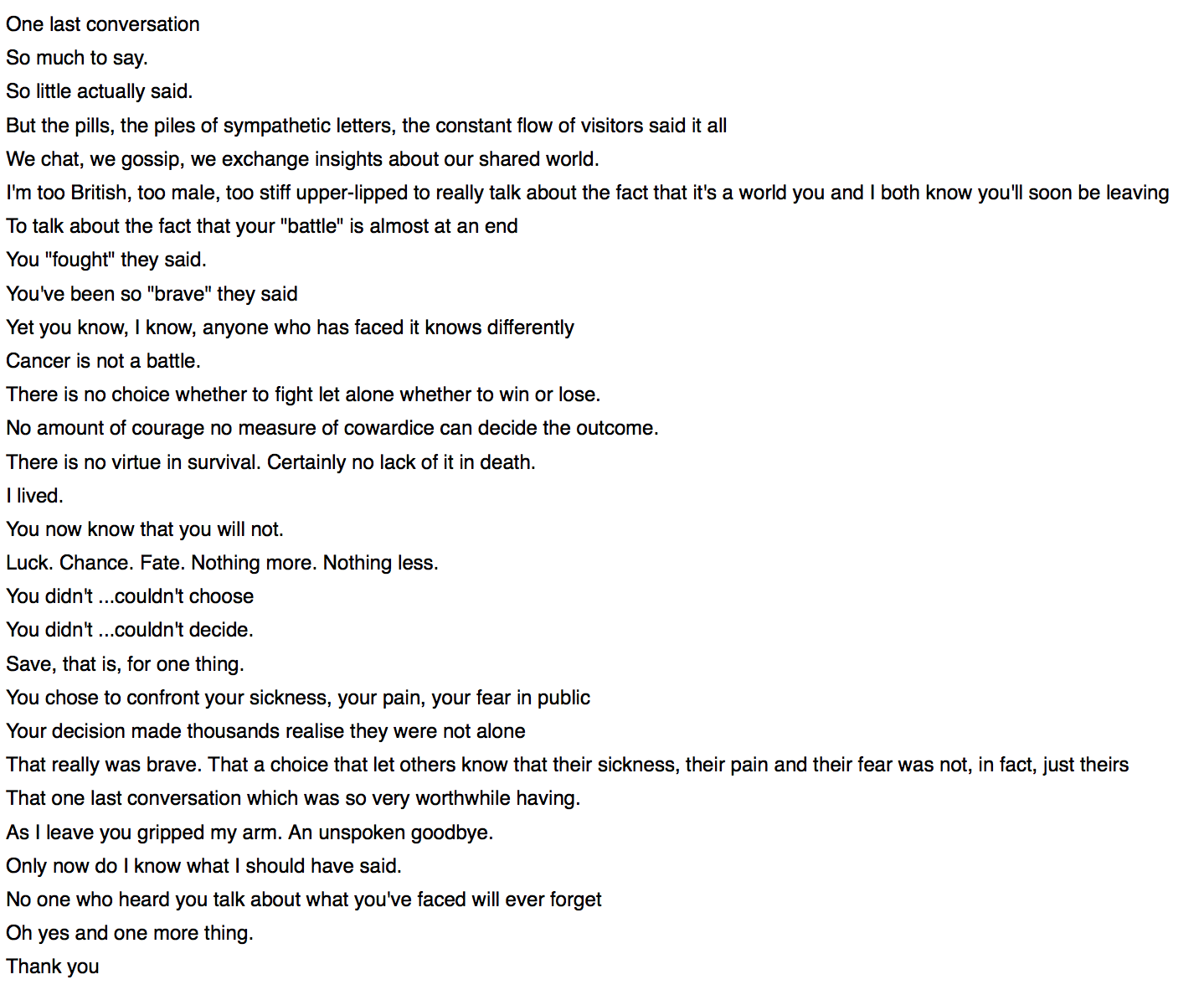 When I was struggling with chemo, there were days that were a real battle, and it felt like I was fighting just to get the energy to walk upstairs to go to bed. I fought with the side effects of all the drugs I was given, and those I am taking now. I cope with the side effects of my surgery that leave me with a burning implant capsule and a painful shoulder. It’s even harder for those with stage 4 or terminal cancer. Their treatment doesn’t stop. Many move from one chemotherapy regime to another, hoping to find one that will keep the cancer at bay and give them more time to live. And you do fight to get through each day.

What I cannot stand is when the media say that someone has lost their battle or fight against cancer. And this is because it implies that person has FAILED. I’d hate for my husband to be told that I didn’t try hard enough.

You die because medical science lost the battle

You cannot win against terminal cancer. It means that there is no medical cure. Really, the media should be saying that someone died because medical science lost the battle against cancer. All of us fight to live for as long as we can, aided by the best (we hope) treatments out there. It is not our fault if we died because of our cancer. It is not because we didn’t try hard enough. Cancer shouldn’t define us in life, and it shouldn’t define us in death. It’s the same with mental illness. When people are suffering from severe, debilitating depression and choose to take their own life to end their pain because the drugs or the counselling aren’t helping them, we again say that they lost their battle or lost the fight. It implies that they didn’t try harder to smile. Unless you’ve had cancer or depression, you cannot possibly imagine what it is like.

Dr Mark Taubert, a palliative care doctor, wrote a great blog in the Huffington Post about the use of battle terminology in cancer. Why is cancer so different? No-one says that someone lost their battle with a heart attack, a stroke, asthma, meningitis? Why does cancer have to have different terminology? I get that the battle / fighting / journey words are emotive and strong and imply the tragedy of it all, but if anyone ever writes about me that I lost my battle against breast cancer, so help me God I will come back and haunt them forever.