So, where were we? Oh yes, I remember. It was 23rd December. I’d just told my family and friends that despite 5 months’ of chemotherapy, the residual cancer in my breast was twice the size of that seen on the MRI, and it had spread to my lymph nodes. Happy Christmas.

I’m not sure how Dermot and I got through the next couple of weeks. We had been given a plan – further surgery to my armpit to remove all the accessible lymph nodes, and the date for that was the 7th January. I was under strict instructions not to lift anything heavier than a wine glass, and couldn’t exercise for another month, to make sure that the implant pocket had fully healed. The risk with exercising early is that the implant moves around, stretching the pocket, and then naturally sits either under your arm, or just below your collarbone – neither are a good look, by the way, and when this happens, it is blooming hard to fix.

Merry Christmas?
We travelled down to London on Christmas Eve to spend the weekend with my husband’s family. To calm my mind (and stop me googling every possible worst-case scenario given the size of my cancer, although I still did), I started frantically knitting a festive jumper for our cocker spaniel. It gave me something to focus on, and an excuse to be quiet and excuse myself from all of the in-laws for a while. They are lovely, but en-masse, on Christmas Day, we were 20, with 5 dogs. Quite a crowd! I finished the dog jumper early on Christmas Day morning, and it can even be used as an Arsenal supporter’s jumper once Christmas is over (I’m a Gooner widow). 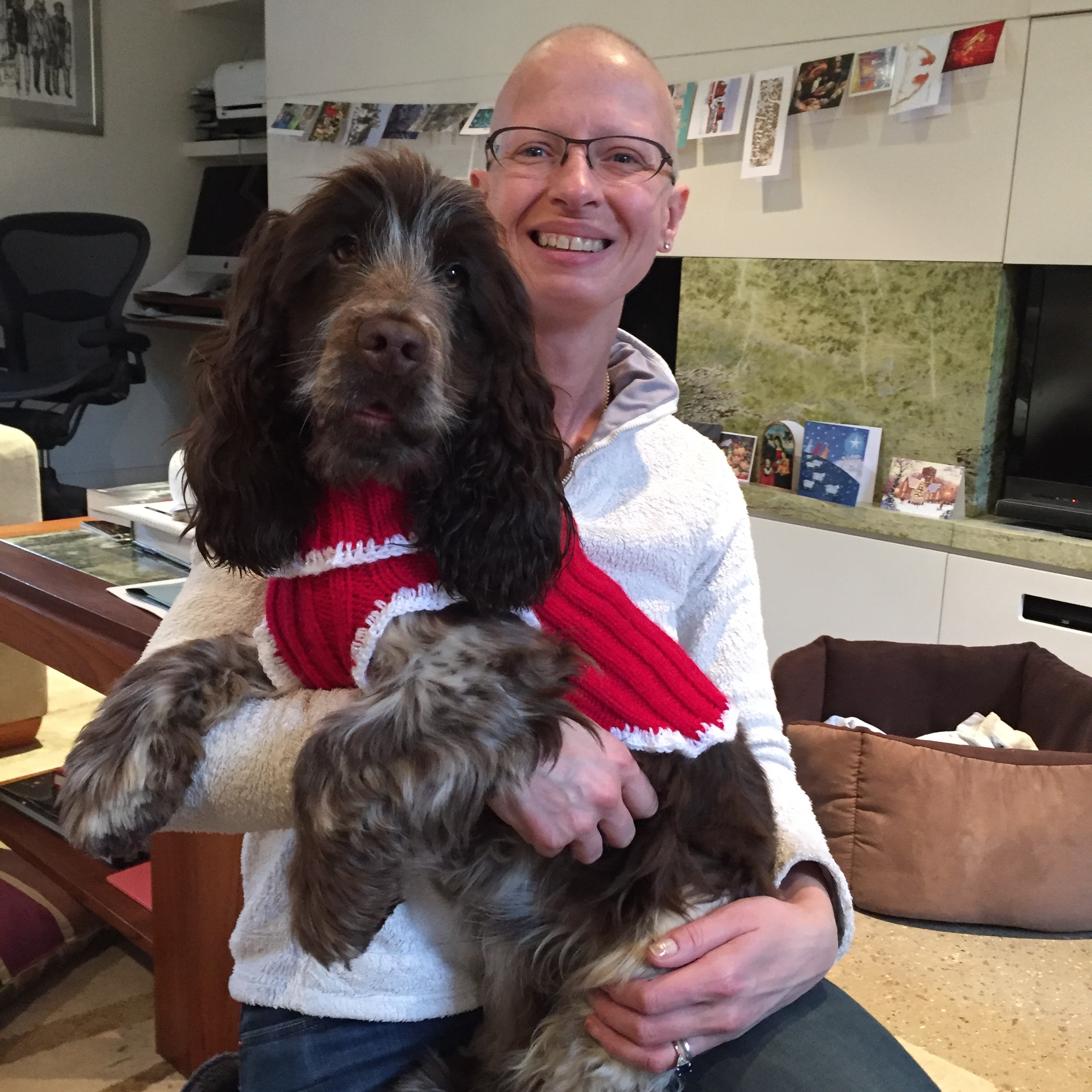 I mostly coped, but it was hard. Hard knowing that I needed more surgery, hard knowing that the risk of the cancer coming back and therefore the risk of my dying before my time was greater than we had thought, hard being surrounded by excited nieces and nephews knowing that I would never have children of my own to bake for and make presents with, hard not having had time to come to terms with the news before being thrown into Christmas week.

I had a wobble late in the afternoon on Christmas Day when Dermot’s sister could see my eyes welling up, and promptly took me out for a walk, which was just what the doctor ordered.

Boxing day morning was also hard, when all the athletic types went off for a park run and I had to stay behind. I never thought I’d ever say that I was jealous of people exercising, but I was. 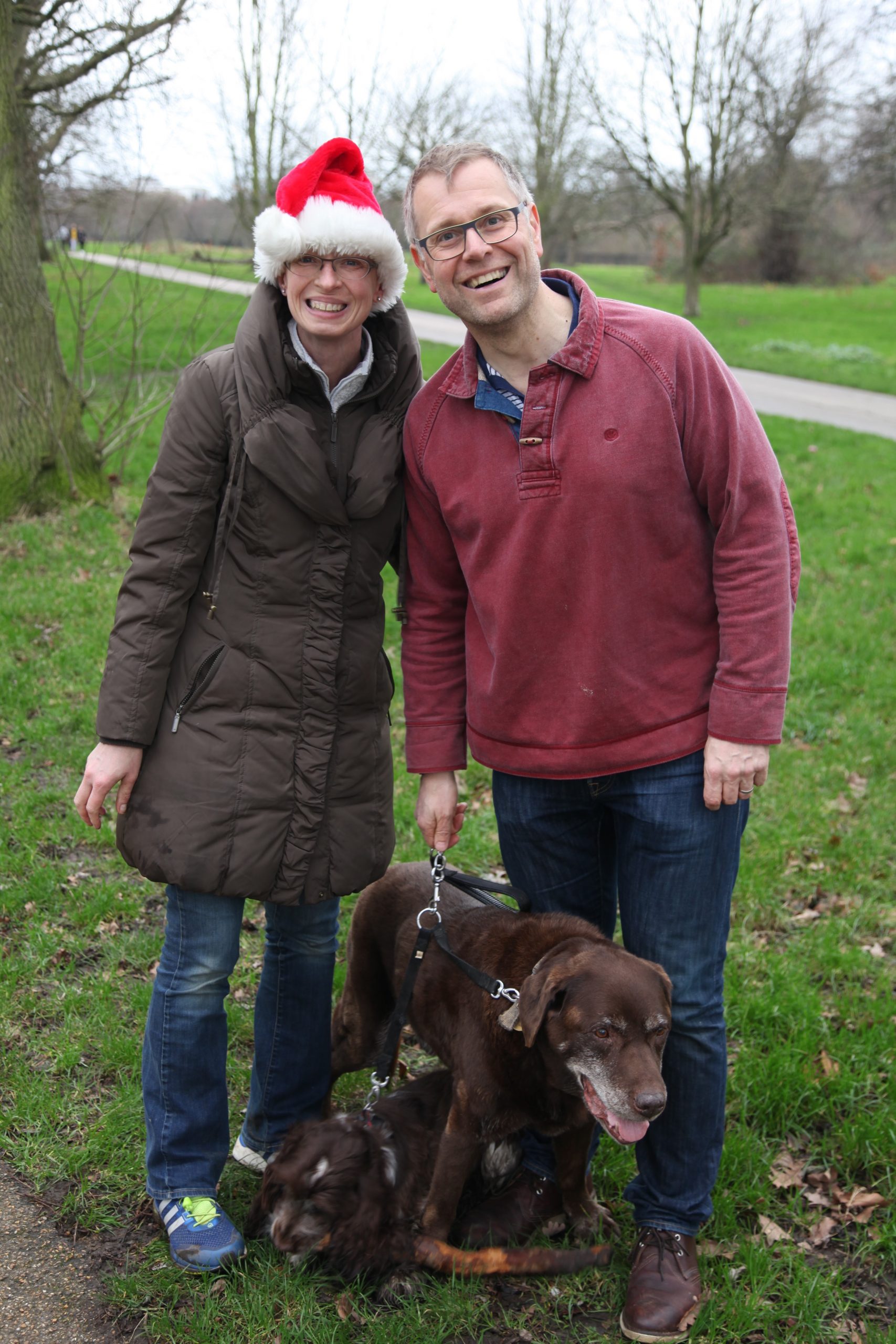 Family swap
We came back to Suffolk that evening, to get ready for my own family coming to stay. My brother, his wife and their son (who are currently living in America) were flying home to Switzerland for Christmas, and therefore they could come to see us. I hadn’t seen them for about 18 months, and it is really difficult doing the cancer thing by Skype with your family, not being able to give and receive a hug in person.

New Year, new beginning?
My parents, Dermot and I had a very quiet NYE, which was just what I wanted. I was in no mood to celebrate the New Year, as I had no idea what it would bring. Once the surgery and radiotherapy were over, my life would be very different. I’d have to learn to come to terms with the fact that I had breast cancer, and cope with getting back to normal again, or finding a new normality.

I have to keep reminding myself that the vast majority of women live a long, long time after breast cancer, even those women who had a lot of involved lymph nodes and had chemo. I also have to keep telling myself that although breast cancer treatment is based on hundreds of trials looking at hundreds of thousands of women, with 5-20 years’ follow-up, the treatments are changing and improving all the time. This means that any figures quoted to patients regarding survival and prognosis are based on studies that were done sometimes up to 10 years ago (sometimes even longer), in order to tell patients the probable 5- and 10-year survival. Because advances in breast cancer are being made all the time, the treatment you have now could be, and probably is superior to what was offered back then, and may change during your treatment to keep up to date with the newest evidence. This means that for many women, their estimated prognosis is even better that the figure they were originally quoted.

The elephant in the room
However, there’s still that little demon in my mind that tells me it’s all bollocks and I could be dead in a year. I had to get Dermot and I to both acknowledge that fact, out loud, so I could then move on and hope that it never happened.

And this is where I find Twitter bad for me. I follow, and am friends with, some fabulous women who have recurrent and metastatic breast cancer, and who are pushing and lobbying for more research and trials to try and prevent other women ending up like them. But it can all be a bit too much for me to read what they are going through, and it’s hard not to imagine myself in their shoes. I’m still learning how to control what I read on Twitter and Facebook.

Jar of Joy
I did nick a fabulous idea from Kate Granger, though. To stop me getting all maudlin and thinking the end is nigh, I bought a vase, and Dermot and I decided to put a little note in it for every good thing that happens to us in 2016. Then we could read them all before NYE 2017. It has been lovely to see it slowly filling up, and brightens my day when I’m feeling sad and low. 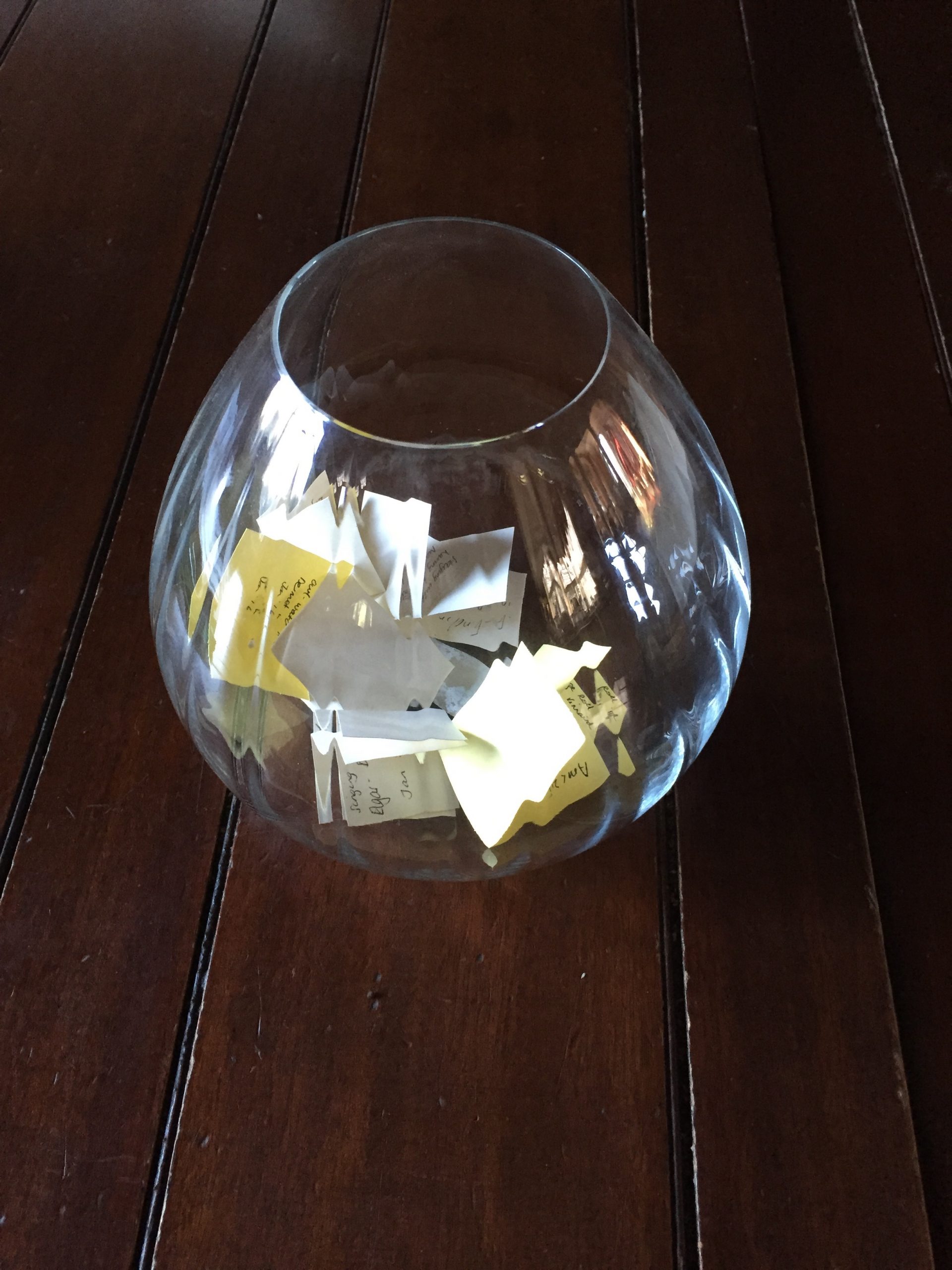 Second time around
In no time at all the day of the second operation had come around. Since the first operation in the beginning of December, I had developed cording, which is when tight bands develop under your skin and stop you being able to fully move your shoulder. I was also experiencing a constant burning pain and an electric-shock sensation on my chest wall going down my arm, and this was getting me down.

A lot of women get a numb patch on their upper inner arm, because of a nerve that has to be cut in order to get access to the armpit and the lymph nodes. All the nerve does is give feeling to that little patch of skin, so it’s safe to cut it, but it’s odd to have that numb feeling. A bit like being in the dentist’s waiting room waiting for your local anaesthetic to work, when you keep touching your cheek because it feels so strange. The burning / electric-shock pain was probably due to the stitches holding the mesh and muscle in place, but it was really hard to cope with. Paracetamol and Ibuprofen didn’t really touch it, and I felt awful at complaining to Dermot the whole time.

I still couldn’t sleep on my left-hand side (which is my normal side), and was struggling to get to sleep on the wrong side. Not being able to have Dermot curl around me in bed, because I was now facing the wrong way, was tough. I’m definitely the little spoon when it comes to sleeping positions!

Every breast cancer patient at the hospital where I was treated is given a heart-shaped pillow to use for support, and it was a godsend to give my arm something to rest on when I went to bed.

Bike course round 2
I’ve been trying to figure out a way to stick to my triathlon analogy, and a friend suggested that I’d just had a puncture which took ages to fix, as my hands were still weak from the chemo, and now I was sorted and ready to go again. That works for me. So – time to get back on the bike.

I was very apprehensive walking on to the ward this time around. The nurses were as fantastic as ever, but they all knew that the cancer had spread because I was back for a second operation, and you can sense their sadness for you. I was first on the afternoon list, and was soon gowned up and ready to go, with a black arrow on my chest marking the side of the operation. Dermot came to say goodbye, and then I was wheeled down the corridor. 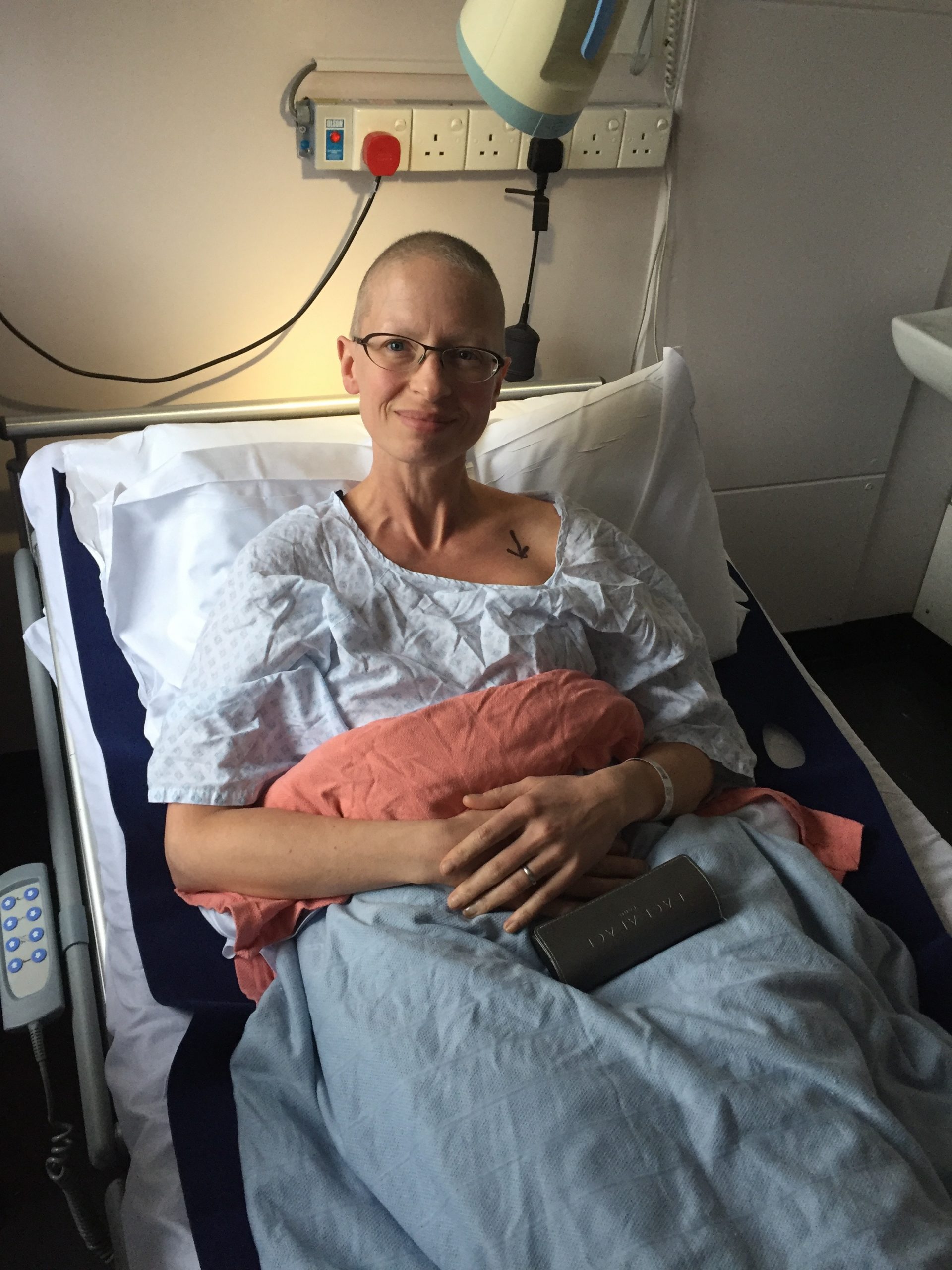 I kept my eyes shut this time, as I definitely didn’t want to see anyone I knew until I got to the anaesthetic room. I had the same anaesthetist as last time, and she remembered to put the gel pads on my eyes to hang on to my few remaining long eyelashes and protect my teeny baby new ones that were growing (very exciting!). My surgeon came in, went thorough the details again, and held my hand as the anaesthetist got ready.

I remembered from the last time that it was a bit sore when I felt the propofol moving up my arm, and was scared that it would hurt again. Most people don’t feel anything, but some of us do. They placed the oxygen mask over my nose and mouth and told me to breathe normally, but I felt a little panicky, as if I couldn’t breathe (which was ridiculous, as oxygen was being pumped directly into my nose and mouth, and I was fine last time – just the anxiety of a second operation and the fear of what the results might show).

The last thing I remember before I went to sleep is crying out in pain, and literally crying, as I felt the anaesthetic burning it’s way up my arm. And then the lights went out.