I woke up from my second operation back on the ward, in the same side room as my last op, feeling a bit sore and a bit dopey, just like last time. My surgeon had put a drain in my armpit because I produced quite a lot of fluid (serum) after my mastectomy, and I had to keep remembering to take it with me when I went to the toilet. 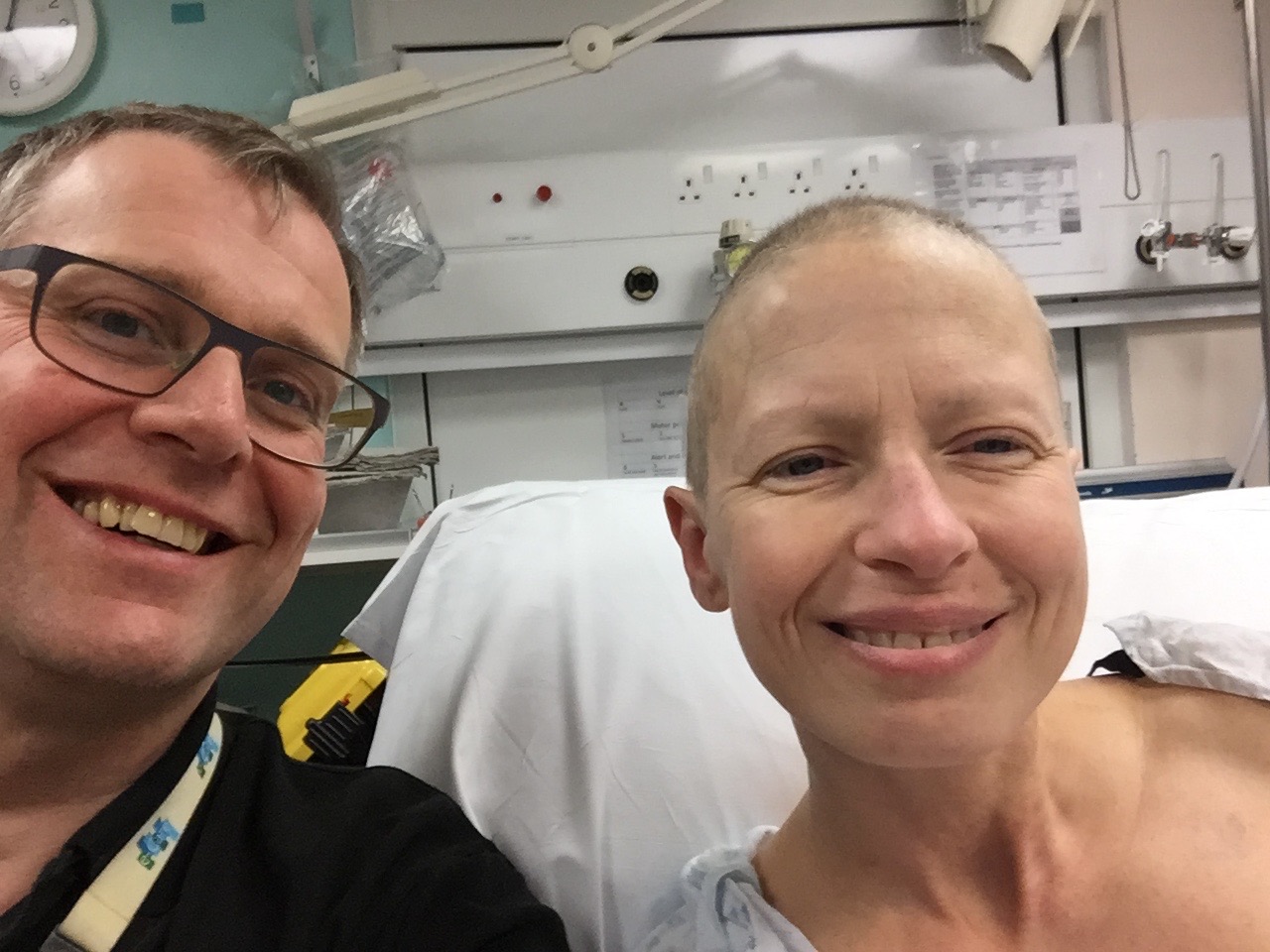 My husband came to see me later that afternoon, with a video to show me. He’d been to see me in recovery as soon as I’d woken up, (I have no memory of this), and he’d videoed me. I was apparently the happiest and most drunk person to ever wake up. In the videos (not satisfied with one, he took another), I declared my undying love for my husband, quoted Savage Garden lyrics from the early ’90s, and said that I needed to go to church (which I haven’t done since I was in the Girl Guides). Hmmmmm…..

Recovering again
I knew what to do this time, and it was back to lifting nothing heavier than a wine glass with my left arm, and wearing my delightful flannel shirts and post-op bras again. No driving for another week or two, either, and I was getting frustrated at not being able to go and do what I wanted, and having to rely on my husband. It was a relief to get the drain out on day 5, and Dermot was allowed to do it at home, to save us a trip into hospital.

I was more sore this time, because I’d had a larger operation in my armpit, and was taking painkillers regularly, together with morphine medicine (Oramorph) which really helped. But the thing that was really getting me down was the nerve pain in my chest wall and inner upper arm, which felt like an electric shock / burn, and wasn’t helped by the painkillers. But you get used to living with it, and I was glad to have my heart-shaped pillow (from the mastectomy) to give my arm something to rest on at night.

Cording persists
I also still had the cording (the tight bands under the skin running along my arm from my armpit to my elbow), and over the next 2 weeks, despite me doing my physio exercises 3 times a day, and adding in the ones on the BreastCancerCare website, it was getting worse. This meant that I couldn’t get my arm straight above my head, and it was painful to stretch it. I was concerned that it would delay my radiotherapy, because I had to get my arm above my head and hold it for 20 minutes for the CT planning scan, and radiotherapy is most effective when given within 3 months of the mastectomy. 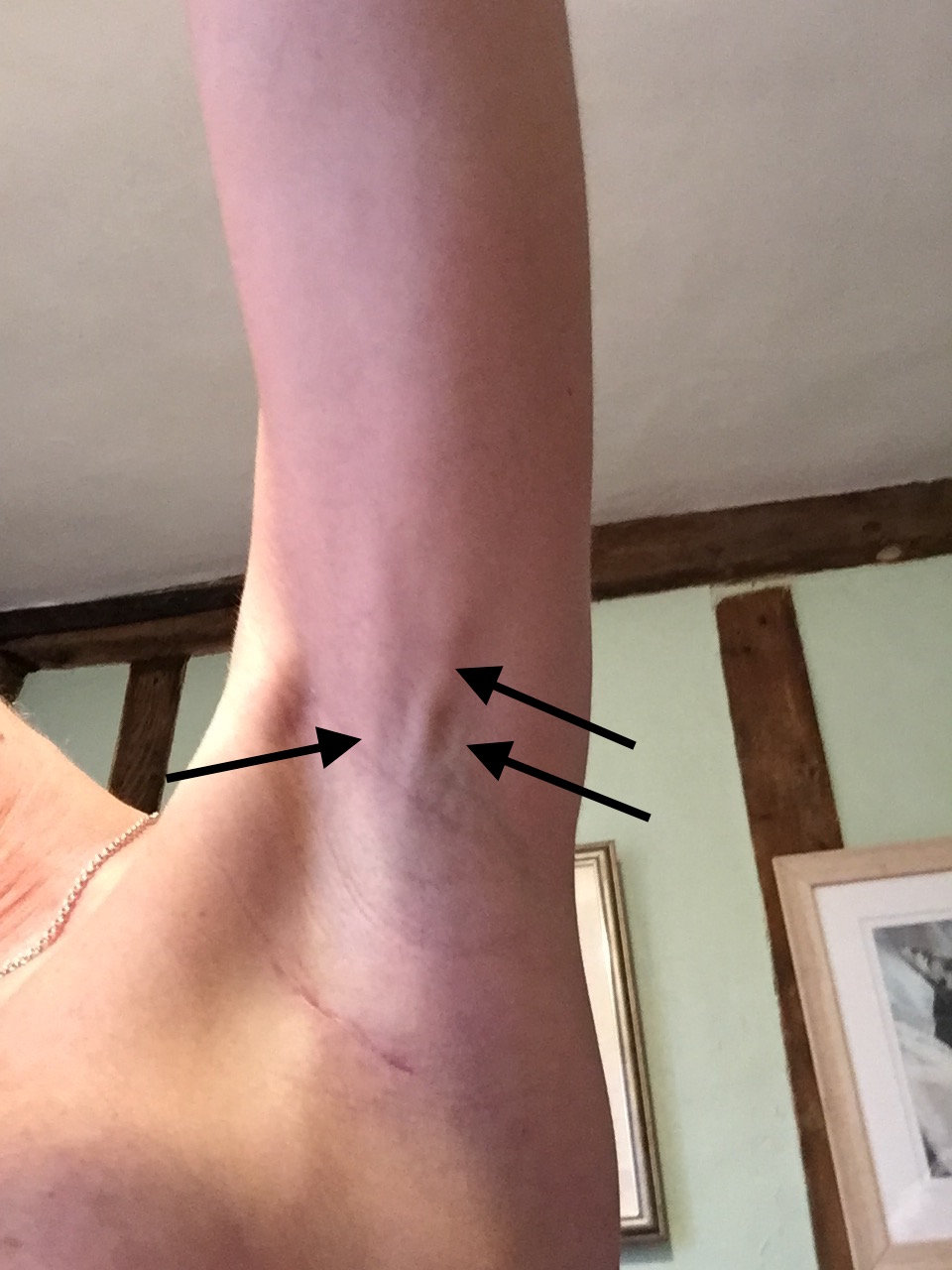 Nipples and things
My nipple now looked like a big black scab sat on my breast (I’ll spare you the photo). This is completely normal, and its very hard as a surgeon to just wait it out, and to get your patients to trust you when you tell them to wait it out. And here was I, waiting for my nipple to fall off and see what lay beneath. The temptation to pick it off was huge, but I was a very good girl / patient and left the scab alone.

I also had a couple of stitches that were poking up under the skin and were exquisitely tender, a bit like having a needle rubbing under your skin. They’re holding my chest muscle to the mesh keeping the implant in place, but because my skin is thin, they are easy to see and feel. The ends of a couple of the stitches were standing upright instead of laying flat. I was worried that they might poke through the skin, which might delay radiotherapy again, as everything needed to be fully healed before I’m zapped. 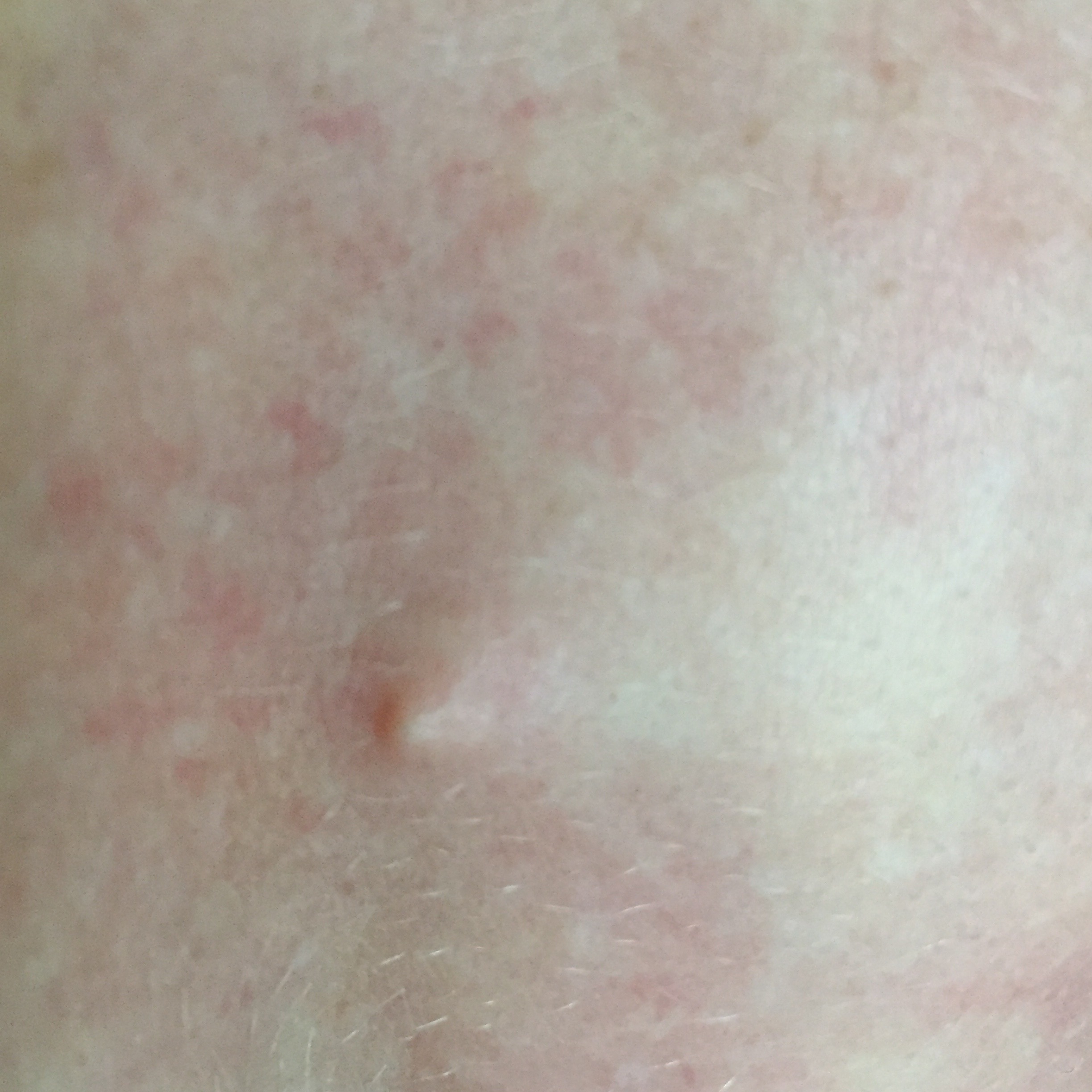 What does an implant feel like? I’ve not actually talked about this yet, have I? I know that I tell my patients that an implant will never look, feel or move like a normal breast, but what does it feel like? Well, most of the time you don’t feel it or notice it, because you’re not aware of your breasts during the day – they just sit in a bra behaving themselves.

What I do notice is that, as expected, the skin is numb to touch, so it’s like being in the dentists when you’ve had an injection and you keep stroking your cheek but it feels really strange (and that’s lost on those of you who’ve never had an injection – sorry). There’s almost no sensation in the skin, so I’m aware of pressure, but nothing else. Also, the skin on my upper inner arm is numb, so when my arm presses against the side of my implant, it feels swollen and strange.

The skin over the implant is a little patchy and darker in colour to my normal side. The most surprising thing is that my new breast feels cold to touch, because the skin is lying over a bag of silicone and not a nice warm breast. That’s something I’d never considered before, but my surgeon said a lot of her patients had told her that their new boobs are cold.

Waiting
I found these two weeks much more difficult than last time. I now had some numbers to play with (the size of the tumour and the minimum number of nodes affected) and spent a lot of very dark hours playing around with various scoring systems on the internet that surgeons and oncologists use to give patients a guided estimate about prognosis and survival (more of these in a future blog). This was very, very stupid of me, but I couldn’t help myself. I’d never seen a patient with a tumour as large as mine, and I got come kind of sick pleasure in seeing just how bad things might be. Dermot kept telling me to stop, but I couldn’t.

I was quite frightened about the future now. Realistically, most lobular tumours in my surgical experience are relatively slow growing and respond well to hormonal treatment, and the ductal part of my tumour had responded almost completely to the chemotherapy, but I couldn’t accept that. All the ‘what if?’ questions kept running through my mind. I started looking for treatments for lobular cancer. Was there anything else I could take that I didn’t already know about? Was there anything else that would keep me alive for as long a possible? I just didn’t believe or accept that hormonal therapy was enough, despite the fact that I recommend hormones for all my oestrogen-positive patients and I know that it works. I had found an abstract from a trial that was presented at a major conference in December that found some benefit from more chemotherapy in women who didn’t respond to upfront chemo, but did I really want to go through chemo again?

Results round two
Unlike last time, I had worked myself up into a state for this appointment. I was prepared for the worst. Plus, the pain I was feeling and the frustration at not being able to move my arm was making me a bit of an emotional wreck. The news we got was the best possible news – only 1 of the extra nodes was involved. For many women, the extra nodes are all clear, so they’ve had an second operation that they didn’t need. However, at the moment, breast surgeons have no other way of looking at those nodes, apart from removing them. And the only real reason we remove them is to get information to tell us how many are involved, as this guides what further treatment is offered.

Trials are now running for women with small tumours to see if radiotherapy to the armpit is as effective as surgery (POSNOC). The website very clearly explains what I’m about to, and probably does it better than me. Neither surgery or radiotherapy to the armpit will ‘cure’ that patient, because the cancer has already spread. The means there is always a chance that there are cancer cells elsewhere in the body that might cause trouble in the future. And that is why we give women chemotherapy and hormonal manipulation (such as Tamoxifen) to target those cells. But both surgery and radiotherapy treat the armpit lymph nodes, and both have side effects such as arm swelling (lymphoedema).

A small percentage of women, who have a second operation to remove the nodes from their armpit, will have a lot of nodes involved. It’s only a small number, because most women with involved nodes have this detected upfront by an ultrasound scan, so they only have one axillary operation to remove all the nodes at the same time as the breast surgery.

I was expecting to hear that all my nodes were involved. I felt cheated when I heard there was only one more node affected. I was expecting bad news, and melodrama, and now felt really flat. For some reason, good news is much harder to deal with. It’s not logical, or rational, and makes no sense to my husband or my family, but it was honestly how I felt.

Everyone was really happy, and saying it was great, but it wasn’t. Not for me. It’s so hard to explain or make sense. I finally admitted to my surgeon that I was in a lot of pain due to the burning sensations on my chest wall and arm, and did my best not to break down in tears (that came later with the breast care nurse). For some reason I didn’t want to upset my surgeon by telling her I was in pain, and wanted to pretend that everything was fine and I was coping. Now I wonder how much my patients hide from me…?

She was wonderful, though, and gave me a prescription for a tablet to help with the pain, and referred me for formal physiotherapy to help get my arm moving. I’d mentioned to her about the trial that I had found, and she made an appointment for me to see my oncologist again so I could discuss it with her.

All I had to do now was keep on doing my exercises, and wait for my nipple to fall off….