Waiting for the results

Home » Waiting for the results
Previous Next

Waiting for the results

It was now time to find out exactly what my patients go through after I’ve operated on them. I must admit to being a huge mixed bag of emotions. I had survived the anaesthetic, and the cancer was out, and all I had to do was get through the radiotherapy. But would it really be that simple? The after-effects of chemo had all but gone, apart from my poor nails, and the residual altered taste, which was slowly improving.

What is pain?
In my head I thought that I wouldn’t be too sore. After all, breast surgery is surface surgery, and it’s not like having a major abdominal operation on your tummy. However, I had just had a breast reconstruction, which is a big operation, and I was expecting to be a bit uncomfortable. I’d been told to take the Oramorph (liquid morphine syrup) regularly, together with paracetamol and ibuprofen, and not let the pain build up.

Diagram of an implant and mesh reconstruction 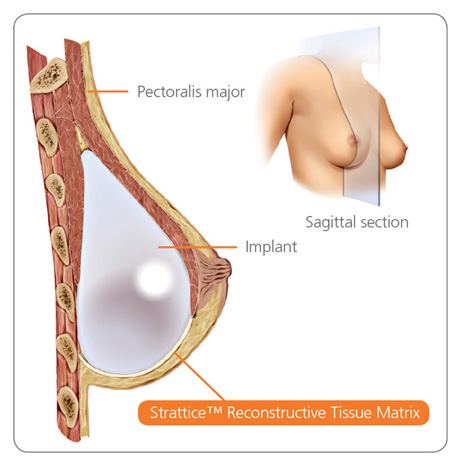 Drains
The first thing to do was get used to the drain. It is used to remove the fluid that the body produces as a response to surgery, in order to help the mesh covering the lower half of my implant stick to the skin. I had a very long plastic tube coming out of my left chest wall, just below where your bra sits. The drain site itself wasn’t too painful. The tube was long enough that I could put the drain on the floor, stand and walk a few steps, to stop me pulling it out when I went to the toilet, for example. I was given a bag to put the drain in to help me carry it around, and it got heavier each day as it slowly filled with fluid. I produced about 50-70ml each day, which is normal for most women. I had to measure the amount each day, and make sure that the vacuum suction wasn’t lost. So far, so good.

Ouch!
The hardest thing to do was to push myself up, either from sitting to standing, or from lying down to sitting. I never knew how much I used my chest wall muscle (pectoral major) in every day activities. It was blooming painful, and I was very thankful for the Oramorph, and the slightly dopey hours I spent after taking it. The breast itself was numb, and was very bruised, again, which is normal. I couldn’t see the scar as it was underneath my breast, where the underwire of a bra would sit, and I could see and feel a couple of the stitches underneath the skin, which were painful to touch. Getting dressed was difficult, because of the limited range of movement in my arm, and the pain I experienced when moving. I had a second, small scar in my armpit, to remove the sentinel lymph nodes, and this was more painful than the breast wound.

Helping hand
Dermot was an absolute godsend in the first few days. Firstly, by being an excellent servant, and bringing me drinks, painkillers and food on demand. Secondly, for (mostly) putting up with me whingeing about how sore I was, and for nagging me to do my daily physio exercises to help with my arm movements. Thirdly, for helping me shower, which is no mean feat when you have a drain to contend with and have to keep the wound dressings dry. And finally for reminding me that I wasn’t to lift anything heavy with my left arm.

Wound check
I saw my surgeon after 5 days, to have the wound and the drain checked. My armpit scar had healed up, but there was a small black scab in the lower part of my breast skin that was giving us cause for concern, as it looked like it might be full thickness. We were all very worried about it. There was a chance that the scab would fall off revealing the mesh underneath, and I would need to go back to theatre.

Because there’s not much of me, there was a very thin tissue plane between my breast and the fat and skin, and sometimes part of the breast skin can die. It was a waiting game, as it normally takes 2-3 weeks for the scab to fall off and reveal what is underneath. I had noticed a lot of pain at the side of the implant, extending up to my armpit, and my surgeon told me that I was developing cording . The tiny lymph channels under the skin form what feels like guitar strings under the skin, or ‘cords’. It was now vital that I did my physio three times a day and massaged the area, to try to break them down. If I did nothing, I might end up with an arm that I wouldn’t be able to get over my head. I had seen several of my patients who had developed this, but didn’t know much about how to treat it, as our physiotherapist sort them out. I wasn’t going to see a physio as part of my treatment, and I now had to deal with something which was a lot more painful that I thought it would be.

The cording is the line running from below the scar up through my armpit onto my arm. 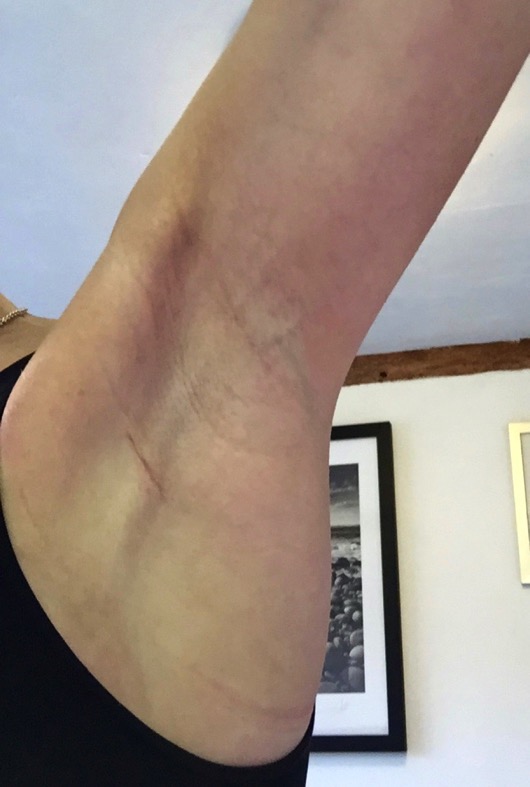 On Day 10, the drain came out. I thought this would hurt, but I didn’t feel a thing. The black patch of skin hadn’t changed, so all I could do was wait, and I hated not being in control. My surgeon and I were a little concerned, as it was so close to Christmas and she was going away. The worst case scenario would be that my breast kept producing fluid, and it started pouring out through the scab. This would mean a very high chance of infection and losing the implant. If this happened, the plan was to take me back to theatre, and replace the silicone implant with an expandable implant to take the tension off the skin, and let things heal. I did not want to have another operation, so all fingers and toes were being crossed. The cording in my arm had progressed down my upper arm, and I was told to keep up with the physio again.

Back again
I’d been told to keep an eye on my breast, and that it might need draining if it swelled up. Over the course of the weekend I went up a cup size and felt very sore and uncomfortable. It was hard to not use my arm, especially in the run up to Christmas, with presents to wrap and a house to tidy and get ready for my family coming to stay. The dogs were sad not to get a walk, as there was no way I could cope with them pulling on the leads. I did try holding their leads with my right hand, but even that pulled on my left chest wall and was too sore. I ended up going back to clinic on the 20th December to have my breast drained, and another 70ml of fluid was removed. On the plus side, the black scab looked a little smaller, and I was starting to think I would get away with it.

Are you ready?
I had my results appointment for Wednesday 23 December. It normally takes two weeks after the operation for this. Firstly, it gives the pathologist (the man / woman with the microscope) enough time to clearly look at the cancer and assess it properly. Secondly, and more importantly, any one with cancer is discussed at an MDT meeting with all the health care professionals involved in treating the cancer. This is to make sure that everyone agrees with proposed treatment plan that is recommended to the patient, and all the correct boxes have been ticked, and that nothing is missed. A friend rang me up the day before and asked if I was nervous. I actually hadn’t thought about it much. I knew that my lymph nodes were negative on the pre-chemo ultrasound scan, I had already had chemo, and the post-chemo MRI showed a very good response to treatment.

Run and done?
I woke up in a relatively good mood, and thought I would dress up for my results appointment. Now that I could fully move my arm, despite the persistent painful cording, I no longer had to wear my flannel shirts. I put on a smart coat, with my smart hat, and went off to meet my husband in the breast clinic. It was a different experience sitting in the waiting room that time. I already knew that I had breast cancer, and obviously looked like a cancer patient with my almost bald head. (Oh yes, I forgot to tell you, my hair is growing back. And it’s very soft, and very grey. We’ll deal with that later). But everyone else was waiting to hear bad news. I must have looked like that all those months ago, anxiously clinging to Dermot’s hand whilst we waited. We were ushered through to the sub-waiting area, and I saw a woman on her own being taken in to the quiet room with one of the breast care nurses, completely in shock from the bad news she had just received. I felt so lucky that I wouldn’t have to go through that again. Then Dermot and I were called in…